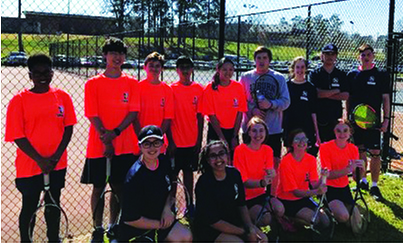 Alex Wilson made it to the semifinals of the GISA state tournament to lead the way for the LaGrange Academy tennis teams this season.

Wilson, competing in the state tournament in Macon, won two matches before falling short against Cameron Godwin of Westwood School.

In the region tournament, Wilson reached the championship match before falling to Alex Stamenkovic of Flint River.

At the state tournament, Wilson beat Johan Lopez of Monsignor Donovan and Payton Bradshaw of Citizens Christian before falling in the semifinals.

Holmes lost in the quarterfinals of the region tournament.

Corley also teamed up with Riley Whitlow to win a doubles match.

It was the final season for seniors Elaina Horlander, Will Holmes, Fikayo Oshinowo and Joseph Ragland.

It was also the last season for Joey Keeth as LaGrange Academy’s coach.

“The seniors have grown in confidence each year, played hard for the Academy, and helped the other members of the team,” Keeth said. “They have welcomed eight newcomers to the team this year. These mainly eighth-graders, witnessed the good conduct and play of our seniors, and have laid good groundwork for next year.”