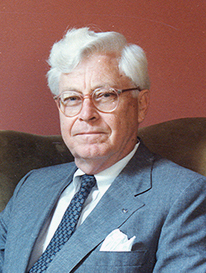 According to the press release, Dr. Murphy became the 23rd president of LaGrange College in 1980 after serving four years as president of Andrew College. He remained at LaGrange for 16 years, retiring in 1996.

“Dr. Murphy left a powerful legacy at LaGrange College,” said current President Dan McAlexander. “Under his leadership, the institution experienced significant growth in the endowment, enrollment and physical size of the campus. His efforts laid the groundwork for many of the successes we enjoy today. Even after leaving the presidency, he and Marianne have provided warm counsel and ongoing support. He will be remembered here for his 16 years of stalwart leadership and for making a lasting impact on the life of this institution — and this community. He truly left LaGrange better than he found it.”

During Murphy’s tenure, the size of the LaGrange campus doubled thanks to the donation of land and facilities from Callaway Foundation, Inc., that included Callaway Auditorium, Callaway Education Building, six tennis courts, two softball fields, sites for Cleaveland Baseball Field and the soccer field and a swimming pool that was converted into Charles D. Hudson Natatorium in 1995.

A capable fundraiser, Murphy helped to more than triple the college’s endowment during his time on the hill, according to the press release.

He also presided over the installation of computer technology across the campus as well as the implementation of a land-use plan with extensive landscaping, and an increase in enrollment from 800 to about 1,000 students.

Murphy was a United Methodist minister and served churches in north Georgia for 14 years before beginning his work in higher education.

He was associated with four United Methodist colleges: Oxford College of Emory University, where he was a director of religious life; Florida Southern College in Lakeland, Florida, where he was executive vice president; Andrew College in Cuthbert, Georgia; and LaGrange College.

He was an active member of Rotary International, serving as district governor and as president of the LaGrange club. To honor him and the club’s 75th anniversary, the Walter Y. Murphy Scholarship Fund for LaGrange College students was established in 1998.

He also served as a member of the board of directors of the LaGrange Chamber of Commerce and of United Way of West Georgia.

Murphy was instrumental in the launch of the LaGrange Symphony Orchestra, offering his support and making college facilities available to the group. He also was involved in the birth of LaGrange Ballet Company by providing spaces for dance classes.

Murphy was educated at Emory University and held the master of divinity degree from that institution. He also was awarded an honorary Doctor of Divinity by LaGrange College.

He married Marianne, his high-school sweetheart, in 1952.

How to deal with two unwanted pests — snakes…