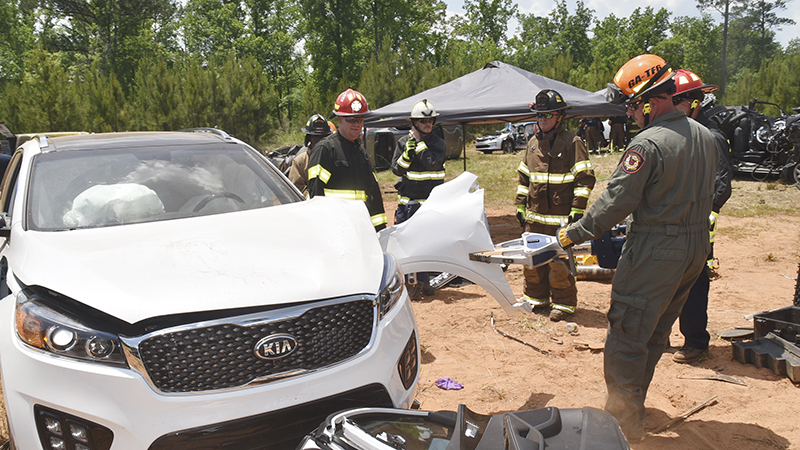 WEST POINT — For the past nine years, the West Point Fire Department has hosted a vehicle extrication training session in May.

For two days, members of the West Point crew, along with members of other nearby departments, get a crash course on the equipment used in case a person gets trapped inside a vehicle following an accident.

According the West Point Fire Chief Mitt Smith, what makes the training unique is it gives his men the opportunity to perfect skills that cannot be practiced often due to the destructive nature of the work.

“There’s no patient inside screaming and hollering, there’s no timeline of getting a person out,” he said.

Kia Motors Manufacturing Georgia donated 10 vehicles for use during the training.

Smith noted that because Kia donated newer model vehicles, his men have become familiar with many of the newer safety features found in modern cars, trucks and SUVs.

“[Usually we’re in a salvage yard and the vehicles are about half the age of the instructors,” he said. “The vehicles provided by KMMG are less than five years old.”

At one point, Smith pointed to a white SUV that had part of its outer body peeled away to show the skeleton inside. He noted a long, red-colored bar of metal called boron steel, which is known for being incredibly strong.

“KMMG has been a tremendous supporter,” Smith said, noting the past nine years of help the company has provided.

Corinne Hodges, Senior Public Relations Manager for Kia, said that because the vehicles are built with safety in mind, it makes it a little difficult to tear them apart.

“With a better built vehicle, when they reach the occupant, he or she has a better chance of being safe already or have the chance of making a full recovery,” she said.

Providing the equipment was Municipal Emergency Services, along with Hurst Rescue Tools.

Jeremy Adams, a sales representative with MES, said they have provided spreaders, cutters and rams for the firemen to train with, along with better airbags.

What makes them unique is that unlike older Jaws of Life equipment, these versions do not require hoses attached to specialized pumps to be operated. Instead they are battery-powered and can be carried anywhere.

Smith added that his men are stronger, both physically and in knowledge, due to this training.

“We can meet the challenges of this new automotive technology,” he said, adding his men have enjoyed themselves throughout the course of training. “Anything that is hydraulic and is tearing up, they are loving.”

Smith noted that many companies besides Kia have helped out, from Coca-Cola providing drinks to Pokey 8th Street Grill providing food.