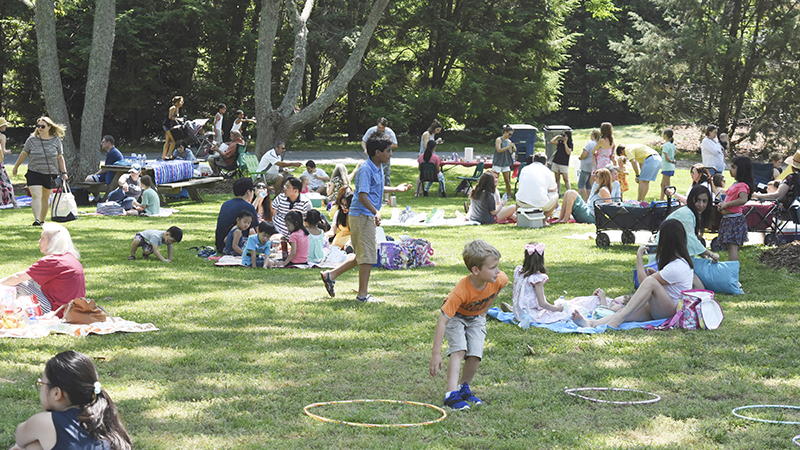 Hundreds of people celebrated Mother’s Day with their family and friends at Saturday’s Picnic in the Garden at Hills & Dales Estate. --Daniel Evans

The weather couldn’t have been more perfect Saturday for Hills & Dales Estate’s 11th annual Picnic in the Garden.

Hundreds of people attended, including a large number of families, who spent Mother’s Day weekend with loves ones. The annual event included pony rides, a cake walk, cornhole and other family-friendly games. Admission was free to the community.

“The turnout is usually weather dependent, but this is what we expect, and we’re thrilled,” said Lauren Clark with Hills & Dales.

Part of the day included a competition for best picnic spread, which was won by Priscilla Andrews, who put together an impressive lunch with little help from her parents.

Andrews’ spread included butterflies made out of pretzels and other unique features, which helped set it apart for the judges.

Shelly Rowland and her family also placed in the top three of the spread competition. It was her first time at Picnic in the Garden.

“I thought what better time to do it than on Mother’s Day weekend?” Rowland said. “I talked to her [my daughter TJ] and thought it would be a good time to come out and spend some time together.”

The event was started with the thought of bringing families together on such an important weekend.

“It’s a family-friendly thing to do on Mother’s Day weekend that really opens up the grounds and gardens so a new, younger generation can explore and hopefully leave with an appreciation for this place and gardening,” Clark said.

Clark estimated a crowd of between 250 and 300 people, which she said was right on pace with what they normally see for the picnic.

“As a mom, it’s so special. This is my favorite event that we do. Just to see LaGrange and the surrounding area come out and enjoy this place,” Clark said. “It’s good to hear the kids running around and see the families enjoying time together.”