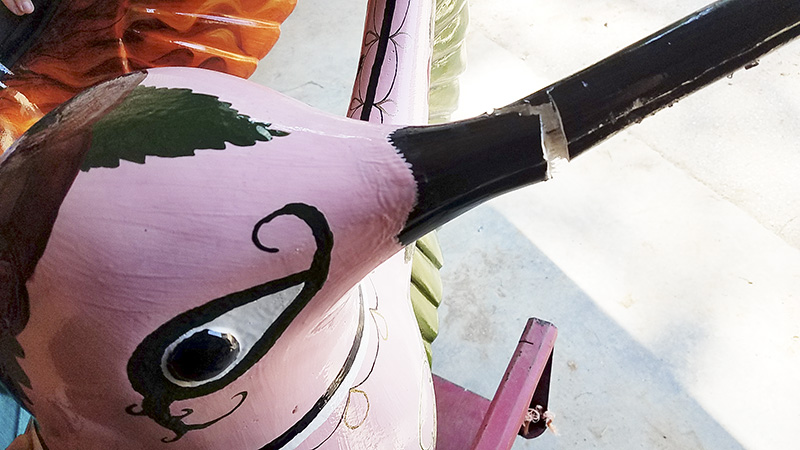 The beak of “The Rose” was damaged Saturday around 1 a.m. The Hogansville Police Department is looking for information on who might be responsible. --Contributed

Investigators with the Hogansville Police Department are looking for answers after two hummingbird figures were vandalized over the weekend.

The hummingbird figures had been placed near the Tower Trail and were painted by local artists. Both were ripped from their stands sometime after 1 a.m. on Saturday and received significant damage. The figures cost $1,300 apiece to make, not counting payment to the artists.

The two hummingbird figures damaged were “The Mad Hatter” painted by Mary Fields and “The Rose” painted by Georgia Metternick-Jones.

“Folks love walking by and driving by and seeing them. This is public art and public art has a lot to do with a community and vitality of a community,” said City Manager David Milliron. “This is just needless and senseless vandalism of public art, and it does infuriate and outrage members of the community who have been working so hard to move Hogansville forward.”

Milliron said the city might rethink where they place the hummingbird figures, so that they will have more security.

A third hummingbird figure, “Ride the Waves,” was ripped off its post earlier this year and was turned in by a good Samaritan. “Ride the Waves” was painted by Laura Gfelner.

“They were torn off the mounts and just thrown on the ground,” said Hogansville Police Chief Brian Harr.

The hummingbird figures were in their locations for no more than six months. Milliron said there are about 10 hummingbirds around the city altogether and more are planned for the future.

He said the idea was for each hummingbird to be painted with a fictitious character and for a master brochure to be created that showed the location and told the story on each hummingbird.

So far, there are no leads in the case. Harr is asking that anyone with information come forward. The Hogansville Police Department can be reached at (706) 637-6648.