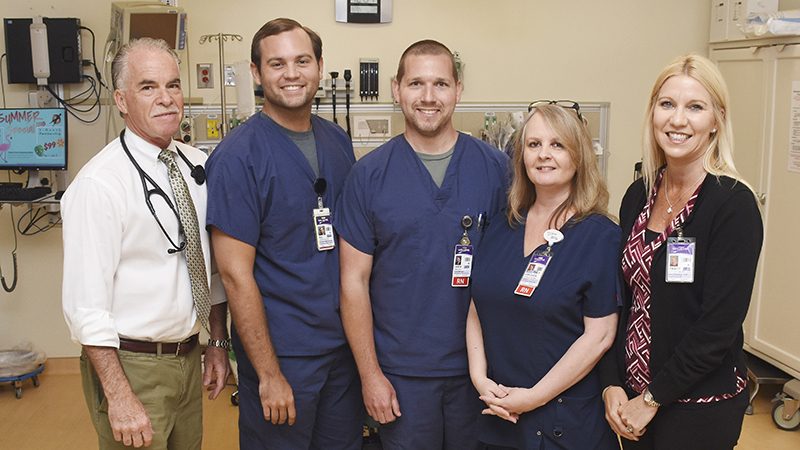 When a person visits the emergency room, they’re having a really bad day. Regardless of the reason for their visit, they feel their problem is urgent enough to go visit a doctor immediately.

The last thing anyone in that situation wants to do is wait for care.

Administrators at WellStar West Georgia Medical Center are working to reduce those wait times, as they realize these can climb at times, leaving patients in the lobby too long.

“This is not just an ER initiative. This is a global hospital initiative,” said Dr. David Ferner, the medical director in the emergency department at WellStar West Georgia Medical Center. “Everybody from the highest level of administration all the way through the emergency department and other levels, X-ray, radiology, housekeeping. Everybody is involved in this process.”

Ferner, who grew up in northwest Ohio, has decades of emergency room experience. He started working in LaGrange in January after previously serving as the medical director in the emergency departments at WellStar Kennestone Hospital and Tift Regional Medical Center.

In LaGrange, he’s already made some significant changes to an ER that treats an average of 165 patients per day, more than 5,000 patients per month and 62,000 per year.

“Our goal is within 30 minutes they are seen by an ER provider,” Ferner said.

The triage nurse can treat and monitor patients in the lobby, starting right after they are checked in. Some patients don’t need to be called back, requiring only a prescription. A recent child with pink eye is an example of that process working.

“Our average triage time in the past, from the time a patient walked in until they were seen by the triage nurse, was about 15 minutes,” said Veronica Hopster, the director of emergency services at WellStar West Georgia Medical Center. “It’s two minutes now. That nurse is in the lobby with patients from 11 to 11 and she can see and recheck vital signs and see if they need be moved to a room faster if they are getting sicker.”

Once patients are checked into the ER, they are assigned a triage number on a scale of one to five. Level one patients are the ones dealing with life-threatening circumstances, such as someone needing CPR or surviving a significant vehicle accident. Level two is assigned to high-risk patients who have unstable vital signs.

Levels four and five are low-risk patients, often put through the fast-track, signifying a quick visit to the ER. They might need a cut sewn up, or may only need a prescription. They do not require much care and can often be sent home quickly where they can rest with medicine.

It’s the patients in the middle — at level three — that often get stuck in the waiting room for too long. Level three patients have stable vital signs, but they are usually experiencing a significant sickness or discomfort.

“They have a real problem. It may be headache, vomiting, diarrhea, pain, but from the stability standpoint they are the stable patients,” Ferner said. “They are the patients who can sit in the waiting room and see the people flying back to fast-track because we are just running them through and then they see the people that are being rushed back because they are in a life-threatening position.”

The WellStar ER measures its average patient acuity level, which typically lands around 3.4, falling in that 3 to 4 average, meaning they aren’t the first to get called back due to a life-threatening circumstance, but also aren’t fast-track patients that only need a quick prescription and a throat swab.

Ferner said the new guidelines are, in part, to make sure patients that fall into the level three category have a quicker stay in the ER, without compromising the service they expect.

Of course, there’s no perfect solution to ensure a perfect experience in an ER. Some days the ER might see multiple patients in critical condition. In other cases, they might be trying to get a soon-to-be-mom to a birthing suite before a new baby arrives.

“We have this very fluid, dynamic environment where two weeks ago on a Monday we admitted 12 percent of patients,” Ferner said.

The emergency room includes 34 beds, with four of those being psychiatric rooms. The ER usually sees around 80 patients per month that are dealing with a psychiatric issue, according to Hopster. Physicians stabilize those patients before sending them to a specialized treatment facility. The fast-track area includes eight beds.

The changes WellStar has made won’t show up in any statewide or nationwide statistic soon, but wait times at the hospital do compare favorably when stacked up to other facilities. The average patient spends 109 minutes in the ER before leaving from the visit, according to Medicare.gov’s hospital compare website. The nationwide average is 172 minutes and in Georgia the average is 178 minutes.

Only about 1 percent of patients leave the ER without being seen. On a board in the ER, there are goals for patient wait times.

The ER’s goal is to have a patient from the door to triage in 20 minutes, from arrival to a room in 45 minutes and discharge to length of stay is 140 minutes.

Each day the board is updated with averages from the previous day. In green are targets hit and in red are goals not made. Monday’s board included all green for the last seven days in door-to-triage.

“We are strongly invested in our community. Most of the people we are taking care of, we went to school with or go to church with,” Hopster said. “We want our patients to trust us, and we want to build that trust with them, so they will come and see us when they are sick instead of staying home and getting really sick.”

At the end of the day, Ferner said that he wants the community to know that the hospital has received its feedback, and they’re working on making the experience better for all involved.