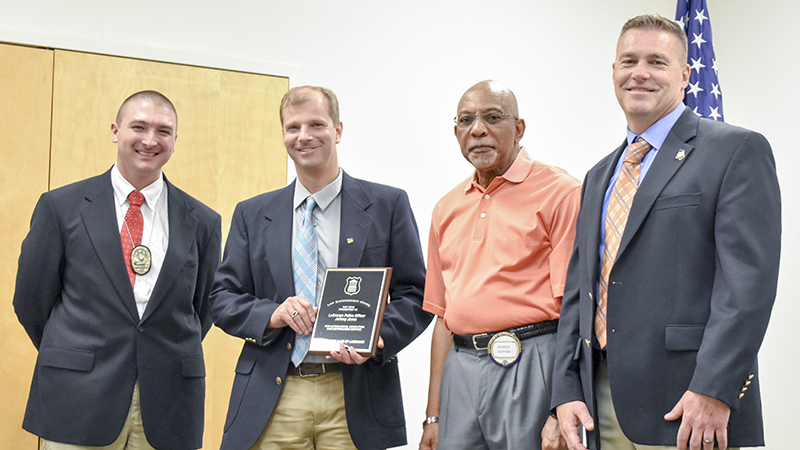 LaGrange Police Department Sgt. William Nelson, LPD Detective Jeremy Jones, Horace Cotton of The Optimist Club of LaGrange and LDP Lt. Dale Strickland pose for a photo. Jones was recognized as the Law Enforcement Officer of the Year for the City of LaGrange on Monday. --Alicia B. Hill

The Optimist Club of LaGrange recognized the City of LaGrange law enforcement officer and firefighter of the year during its regular meeting on Monday.

LaGrange Police Department Detective Jeremy Jones and LaGrange Fire Department Firefighter Daniel Fogg were recognized for their service to the city and the community by The Optimist Club.

Jones is a U.S. Army Veteran who has served with the LPD for 19 years. He currently works in the investigations section.

“Detective Jones has served the LaGrange Police Department since 1999,” LPD Sgt. William Nelson said. “He began his career as a patrol officer with the LaGrange Police Department and served there until 2003, when he was promoted to rank detective. Since 2003, Detective Jones has been a reliable, solid core in the investigation station and always puts an emphasis on providing quality service to the citizens of LaGrange.”

Nelson said that Jones has become a positive example for the department. Jones has personally recovered about $700,000 worth of stolen property in the last two years, and he has cleared three new homicides and two cold case homicides in the last year, according to Nelson.

“I can speak for myself as well as all the others here who have come up through the investigative ranks since that time — Detective Jones would always take you under his wing and really remind you that you wear a gun and a badge every day, but there will come a time when that is not the case,” Nelson said. “You are a citizen just like everybody else in this community. You always treat citizens in the community with fairness and compassion.”

In comparison, Fogg is a newer member of the force, but his work has already made an impact on the community and his peers.

“Daniel was hired by the LaGrange Fire Department in 2016, and he logged over 500 hours of training last year,” LFD Lt. Josh Williams said. “Firefighter Fogg finished all of his probationary requirements ahead of schedule.”

Williams said that achievement alone was impressive. He also said that Fogg was nominated by his recruit class as the honor graduate in recognition of the assistance he provided fellow recruits.

“I’ve just strived to do everything that my officers and my peers and my deputy chiefs have asked of me and required of me, and I feel like me winning this reward after two short years of being here is a testament to our department and the leadership,” Fogg said.

“I appreciate all of y’all and all you’ve done for me.”

The Optimist Club of LaGrange meets at the Mike Daniels Recreational Center on Mondays at noon. To learn more about the club, visit them on Facebook @OptimistofLaGrange.

Dr. Almand recognized for service to Troup County Board…