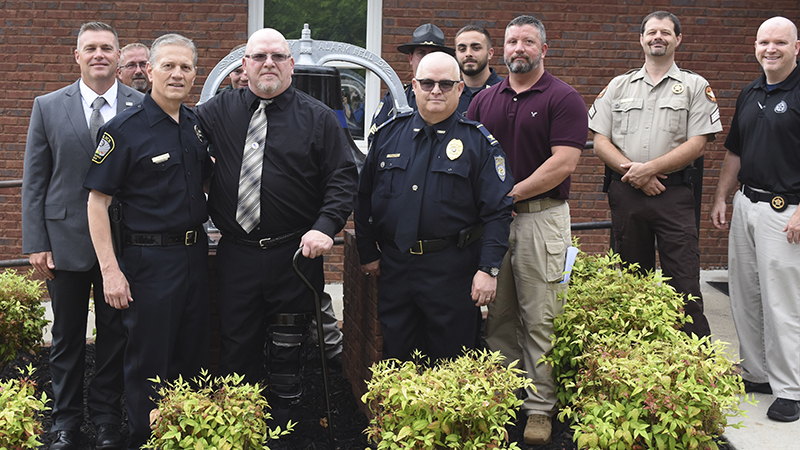 Local law enforcement officers pose for a photo with the Peace Officers Memorial Bell at the Hogansville Police Department. The bell was renovated in honor of police officers injured or killed on the job. Officers rang the bell three times during Wednesday’s ceremony, once in honor of police officers who have been killed this year, once in honor of a Georgia officer who lost his life and for a Hogansville officer who was killed decades ago. --Daniel Evans

The bell in front of the department, formerly known as the old All Call bell, was repainted and turned into a law enforcement memorial bell.

“It just never had a purpose. Well, now it has a purpose,” said Hogansville Police Chief Brian Harr. “My thanks to those who redid it. I was going through some tough times when they redid it, and it lifted my spirits a little bit.”

The bell was rung three times on Wednesday — once for the police officers in the United States that have lost their lives in 2018, once for Locust Grove Police Officer Chase Maddox, who was killed in February and once for a 1972 Hogansville officer who was killed in the line of duty. Tuesday was Peace Officers Memorial Day in the United States, a day that pays tribute to local, state and federal peace officers who have died or been injured in the line of duty. This week is also national Police Week.

The guest speakers at Wednesday’s ceremony were former Lt. Rick Massie and Jamie White, the deputy director of Harris County 911, both who survived tragic events.

“They each have a story from an entirely different perspective. Both life changing, both potentially fatal. Both of these men are survivors, and I think about them so often,” said Sgt. Jeff Sheppard with the Hogansville Police Department.

“This memorial is as much about survivors as it is about those who have gone on before us.”

In his days with the Troup County Sheriff’s Office, Massie was nearly killed in a head-on crash when a vehicle rounded a curve on the wrong side of the road. Massie was awarded the purple heart in 2013 by Sheriff James Woodruff and has overcome 15 surgeries.

“After I got hurt, it was shocking the amount of people I put in the jail, family members of people I’d put in the jail, calling my house and asking if they could cut my grass. Asking if they could come see me,” Massie said. “When I started out, we only have five deputies on patrol, so you had to be able to get by on being able to talk to people. I think to some extent that’s a lost art now.”

Massie had already survived one head-on collision and said he felt bulletproof before his second accident.

“My world changed in a flash. I still see it in my sleep sometimes. I still see it when I’m driving,” Massie said. “My wife will tell you to this day I can’t drive a car. I’m OK in a truck, but you get me around a car I start having problems.”

Massie has two more surgeries scheduled for the future, but he said the wreck changed his entire outlook on life. As a father and husband, he’s thankful that the end result wasn’t different.

“I miss law enforcement, but I miss the brotherhood and sisterhood worse than any of it,” Massie said. “The fact that I always knew that there 30 or 40 people I could call and say I need you to come and there’d be a whole host of folks showing up. And they’d still do it now to an extent, but now I’m not able to do it when they need me.”

White was a Harris County Sheriff’s Deputy when he initiated a traffic stop on a vehicle that was going more than 20 miles an hour over the speed limit. The person driving that vehicle, 24-year-old, Joe Lee Garrett, allegedly shot White in the head.

“Every time I go to the doctor, and I’ve been to numerous doctors, they are grinning when I walk in the room,” White said. “I know where it’s going because they’ve done it from day one. They say ‘You shouldn’t be sitting in my office.’ I could have very easily been the 162nd officer that was killed in 2016. I could’ve been the ninth one killed in Georgia in 2016.”

White said the support he received was incredible.

Representatives were also at the ceremony from the LaGrange Police Department and Troup County Sheriff’s Office.