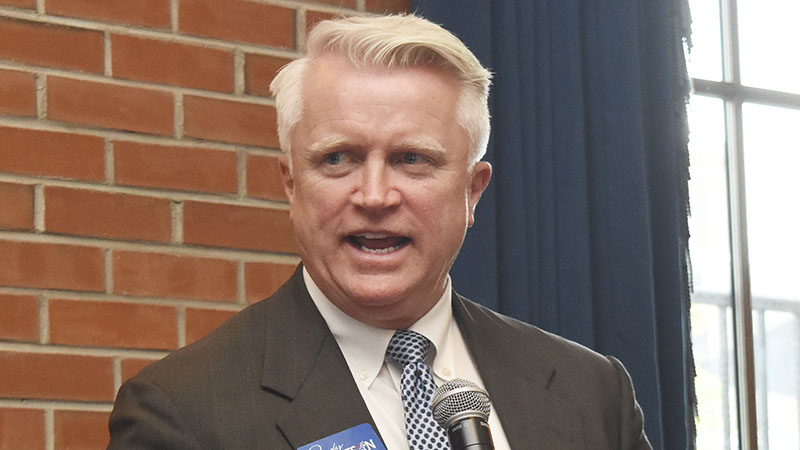 State Senate candidate Randy Robertson was investigated for an extramarital affair while serving as a lieutenant for the Muscogee County Sheriff’s Office nearly two decades ago.

According to documents from an internal investigation from the sheriff’s office, the incident took place in 1999, the proceeding investigation found Robertson in violation of conduct unbecoming of an officer and immoral conduct. According to the findings from the investigation, Robertson and Kathy McArdle, his sister-in-law at the time, had sexual contact on two occasions in March or April of 1999.

McArdle said that both incidents occurred while Robertson was still on duty, but Robertson maintained during the investigation he was not on duty. He reaffirmed that position on Thursday.

“I’ve never stepped away from this mistake. I’ve owned it for 20 years,” Robertson said. “I’ve never denied it, and I’ve always been very honest about it. I think everybody wishes they could go back and change things, but you know what? I’m the man I am today only because of great choices I made, but also because of some of the mistakes I made.”

Robertson is one of four candidates running for state senator in district 29, which includes parts of Harris, Meriwether, Muscogee and Troup County.

“Lt. Robertson stated Ms. McArdle called him and asked him to meet her. Lt. Robertson added the meeting was to talk,” the internal affairs investigation reads. “Lt. Robertson advised ‘they started to have sex but nothing was finished.’”

Robertson and McArdle agreed that Robertson was in uniform when the two met at Sam’s Club and driving his patrol car. Robertson said he was on his way home from work when he received a page from McArdle, asking for him to meet her. They met in a Walmart parking lot, but moved behind Sam’s, according to the internal affairs investigation document.

Robertson said he got into McArdle’s car.

“Lt. Robinson added the doors on the car were closed, the windows were up, and they were not out in the open,” reads the internal affairs document.

The affair between Robertson and McArdle took place in 1999, but it was not brought forward until a year later. Robertson said by that time, he’d already told everyone in his personal life about the relationship he had with McArdle.   Jody McArdle, who was married to Kathy at the time of the affair, said he felt it important to inform the public and let voters decide for themselves whether this information impacts their opinion.

“I decided it was very important information for the public to know,” McArdle said. “Especially when I had people send me screenshots from his Facebook page talking about how, in all his career, he had never done anything to waste taxpayer money. I thought, ‘Yeah he has.’ What he did was actually on duty and in uniform and in a patrol car. He denies it was in a patrol car but regardless he showed up in a patrol car, a city-funded vehicle, so he was wasting dollars to have an affair.”

While McArdle maintains Robertson was on duty while taking part in the affair, the internal investigation did not find this to be true.

Robertson said no discipline was handed down for the violations, since they took place when he was not on duty.  He noted that conduct unbecoming of an officer can include off-duty actions, which is specified in the report.

McArdle said the relationship affected more than just his ex-wife and Robertson. It also largely affected the lives of the children involved.

“The three kids who were involved had a parent missing from their life,” McArdle said.

Robertson said his overall police record, which includes serving as President of the Fraternal Order of Police Georgia State Lodge, speaks for itself. He said in 30 years at the MCSO, he never received any type of discipline. Robertson retired from the MCSO in 2015.

“I had just lost my dad, and I was going through a divorce, but those are not excuses for the mistake I made,” Robertson said. “It was my mistake and I owned it. Thirty years of law enforcement as a professional law enforcement officer, I’ll put my file against anybody.”

Calls to Kathy McArdle were not answered on Thursday.