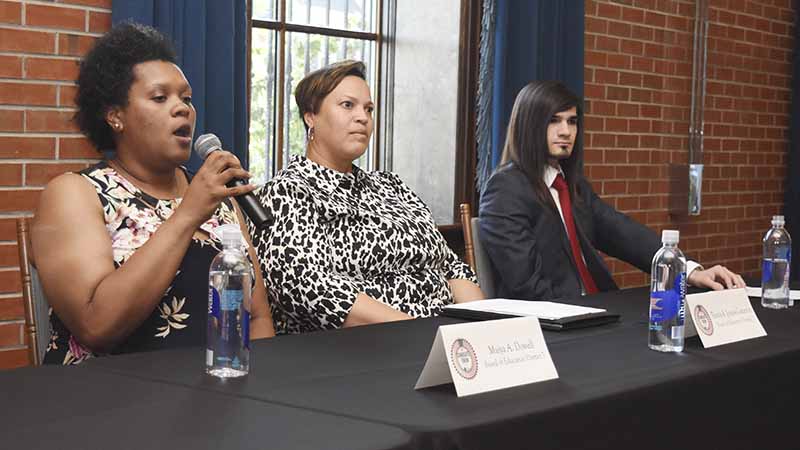 Maiya Dowell answers a question at a candidate forum while Tanya Katina Jones-Cameron and Elijah Kresses look on. All three are candidates for district seven on the Troup County School Board. --Daniel Evans

The most crowded local race on Tuesday’s ballot will include three candidates for district 7 on the Troup County School Board.

Elijah Kresses, Maiya Dowell and Tanya Katina Jones-Cameron are up for the seat, and none of the three have ever held political office. The district 7 seat is currently held by Alfred McNair, who decided not to run for re-election.

The LaGrange Daily News called each candidate, asking for their views on the school system and how they would improve it overall.  Here’s a look at their answers:

Dowell said she wants to be a voice for students, parents and teachers. She believes many teachers feel disengaged right now and are unable to do all they’d like to help students succeed.

“We need to make sure we can get into their psyche. If they are needing support, how can we as a school board get support for them?” Dowell said. “Let’s do a monthly meeting, let’s gather the teachers in, let’s do something on the weekend. Let’s send them somewhere to gather their thoughts and get some input from them. How can we make decisions for these people, and we don’t get their input?”

Jones-Cameron said her focus is on making sure every child receives a quality education.

“It goes back to the quality of education for our students, making sure they are empowered women and men,” Jones-Cameron said. “I want to make sure everyone receives an education of being able to be productive in society.”

Kresses had a similar stance, believing the school system needs to do more to prepare students for life after high school.

The candidates were asked about improving the Troup County School System’s graduation rates, which rose in 2017 to 78 percent. That’s also a 6.6 percent increase from 2015.

However, the state average in Georgia is 80.6 percent and all three high schools fell short of that number.

“We’ve done a good job bringing them up. I think Callaway High School has brought them up the most, I think 11 percent in the past couple of years. Maybe a little higher than that,” Kresses said. “What they do is they have a data office where they are looking at each student’s progress in real time so that they can intervene before a student falls too far behind before it’s too late. I think that’s something every school should look at implementing.”

Callaway High School’s graduation rate has improved 11.3 percent since 2015, the largest increase in the county during that time.

Dowell believes students need to meet with counselors more often, rather than just once a year. Starting in middle school, she thinks students should be learning more about careers and looking forward to the future.

“We need to start in sixth grade introducing careers and college, letting them understand you have to have this certain grade point average to get in this school,” Dowell said. “We need to introduce these universities, having them come down to middle schools,” Dowell said. “In high school, some of our children don’t know what’s required because they’ve possibly only talked to their school counselor four times in the four years that they’ve been there.”

Jones-Cameron said it’s all about making sure the state guidelines are met in the classroom.

The candidates were asked about two recurring issues that are plaguing schools nationwide — students bringing drugs to school and the issue of making schools safer.

Jones-Cameron said the system needs to do whatever it takes.

“I come from a long line of law enforcement officers,” Jones-Cameron said. “Our kids should feel safe and not pressured to use drugs. We have to do what’s necessary to educate our kids on drugs and alcohol.”

Kresses said he is focused on safety in schools as one of the main points of his campaign. He said the answer is more student resource officer, which are available at some middle schools and all high schools in Troup County.

“I 100 percent support that and if elected I would not allow funding for middle school or high school resource officers to lapse,” Kresses said. “However, we don’t have them at the elementary school level, and I think with recent events with students bringing drugs and weapons, but also intruders, it’s becoming apparent that we need protection for our elementary school children as well.”

He said he believes the funding for additional school resource officers is available in the system’s budget.

Dowell said programs like Drug Abuse Resistance Education should be more prevalent in schools. She said school leaders need to realize that drugs are available for many students, and all too often they’re coming from the home.

VAAL to exhibit at Artisans on the Square in…