Crews, Foster up for commission chairman 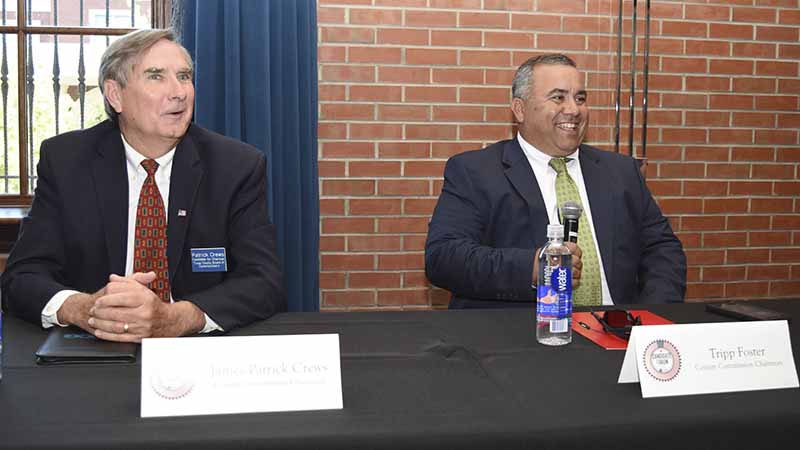 On Tuesday, Troup County voters will decide who will represent their interests at the county level — incumbent Patrick Crews or challenger Tripp Foster.

Here is where each candidate stands on local issues:

What would you aim

to accomplish in office?

Both candidates for commission chairman saw room for improvement, but their focuses couldn’t be more different. Crews’ goals centered around ensuring that Special Purpose Local Option Sales Tax projects to benefit county citizens will be completed.

“The citizens approved several projects with the SPLOST, and so things like the addition to The Thread, the new fire station and upgrades to our fire department, the multipurpose building out at Pyne Road Park — so that local citizens and companies can have access to it for events. The new Agricultural Education Center is also really important to me personally,” Crews said. “Those are some of the big items that I personally think about.”

Foster’s goals centered on increased transparency and installing a countywide water system. He said that he would commit to livestreaming Troup County Board of Commissioners meetings on Facebook to make them more accessible to the public and holding town hall meetings every 90 days.

“We’ve never had a countywide water system in Troup County, and it is something that has been needed for over 30 years, and each time the people who were elected during those times didn’t work toward getting that done in Troup County,” Foster said. “I’ll tell you why that is important for fire protection. A lot of houses and properties end up burning up in Troup County because we can’t get an adequate water supply to the fire department to get these fires extinguished.”

Foster criticized the current state of the convenience centers.

“Our convenience centers are a disaster,” Foster said. “They are dirty. They are filthy. The dumpsters are overflowing. There are rats. We are having equipment problems. There’s not an adequate supply of dumpsters, and the other problem is four years ago, we voted on a millage increase to fix the jail at the sheriff’s office — by federal mandate and state mandate we had to do that — but we also were going to invest a couple of million dollars in the convenience centers. That did not happen, yet they are still collecting this $1.4 million a year off of citizens.”

Foster said that town halls on the convenience centers needed to take place and a 15-member task force should be formed to engage citizens and find solutions.

However, Crews pointed out improvements that have been made to the convenience centers.

“In the last couple of months, we’ve been able to extend the hours at many of the convenience centers through putting in the new doors that allow people to just drop their trash, and it’ll compact itself,” Crews said. “This Saturday I think will be the third Saturday that we now have hired additional drivers on Saturday who will take our trash, who can pick up the containers.”

Crews said that some recent concerns regarding the centers have not been as simple as they appear to be on the surface. He said that the problem focuses on reevaluating vendor contracts and finding a new hauler for the garbage.

“The big issue is people have wanted to associate the excess trash at a couple of our convenience centers with the closing of the work camp, and that is just absolutely not the case,” Crews said. “The problem has been that we contracted with the City of LaGrange for many years to haul our trash, and they are currently reevaluating their commercial trash pickup.”

The issue of litter has been discussed at length since the closure of the Troup County Correctional Institute, but Crews said he has seen progress toward fixing the problem.

“I think there is progress being made in the sense that we’ve made the public aware of it, which is the first thing that you’ve got to do,” Crews said. “I went to a class last Friday at Ethyl Kight Elementary, and I spoke to a group Monday night at a church and litter came up. I think we are in that public awareness campaign right now.”

Crews commended the Troup County Sheriff’s Office for its work with local judges to establish a regular litter detail in the last few weeks, but said that ultimately attitudes about litter would need to change before Troup County can be litter free. Foster agreed that attitudes were the problem, and the county needs to encourage good citizenship.

“I think we first of all need to have a conversation to the public about just citizenship,” Foster said. “We need to talk about what good citizenship is. I think good citizenship first off needs to be taught in the home, but secondly, we need that curriculum back in our schools.”

The candidates also stated their opinions on one of the most controversial decisions the commission has made in recent years — the closure of the Troup County Correctional Institute.

“We had it going right when I was in office,” Foster said. “I am out of office not even two years, and the closing of the prison to me was one of the most catastrophic decisions ever made by the board of commissioners in 50 years. It has caused a chain of events that are negative. We’ve lost 70 percent of our public workforce because of inmate labor. We’ve put 100 percent of the workload on 30 percent of the existing employees, and there is no way they can adequately keep up.”

Foster said that if he had been on the commission at the time, he would have requested a professional cost-benefit analysis of the closure be performed by an outside consultant prior to the closure.

Crews stood by his decision. He said that it was the only way to give county employees raises without raising taxes.

“We had to do what we needed to do for our people, and what was considered best for the county,” Crews said.

“Rather than raise taxes, we felt like that was the best choice. So, am I happy with all aspects? No, but would I have done it any different? I don’t think so. We still think it was the right decision for our county.”

Foster has alleged on Facebook that county representatives have removed his campaign signs. Crews flatly denied the accusation and said that his campaign had followed rules and that there was no evidence of tampering or sign stealing by county officials.

“I would say that my campaign tried to follow the rules of asking permission first and staying off the right of way,” Crews said. “If we were asked to remove a sign, we would be happy to go and remove it if it upset somebody.”

Despite the comments online, Foster was hesitant to discuss the issue on Thursday.

“I’m just going to let the facts of the matter speak for themselves,” Foster said. “I have a Facebook page ‘Tripp Foster for Troup County Chairman 2018,’ and people can go on there and look at the videos. The evidence speaks for itself.”

To find a full listing of what will be on your ballot on Tuesday, visit Mvp.sos.ga.gov/MVP/mvp.do.