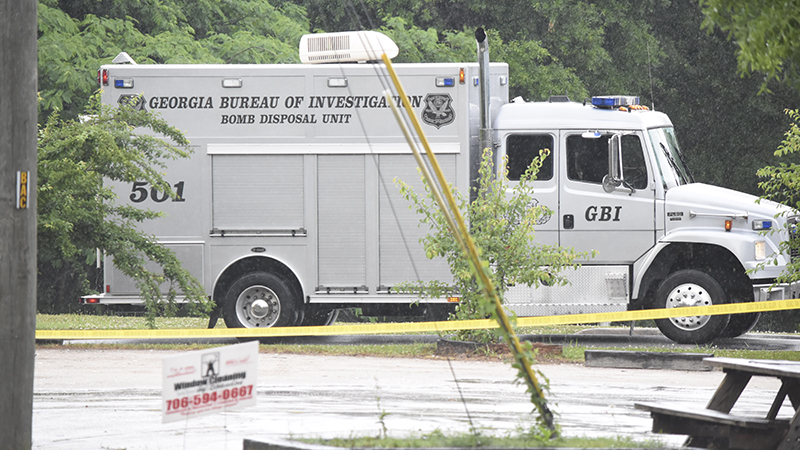 The Georgia Bureau of Investigations was brought in to investigate a package on Mooty Bridge Road on Friday. --Daniel Evans

A suspicious package on Mooty Bridge Road Friday morning caused a brief scare, but investigators determined there was no threat.

The package ended up being completely empty, according to Detective John Slonaker with the LaGrange Police Department. The Georgia Bureau of Investigation’s bomb squad was called in to investigate the package, and X-rayed it to determine its contents.

“It was for the purpose of causing public alarm, but there was nothing to it whatsoever,” Slonaker said. ”It was disguised to illicit this kind of a response.”

The LaGrange Police Department responded to a call at the Stock Yard around 5:30 a.m. Friday, after the butcher shop’s owner, David Bond, found the package outside the business.

“It was right in the drive thru,” Bond said. “But it wasn’t there yesterday.”

The package was wrapped in foam rubber and was at least partially duct taped, according to Bond. He said there was at least one wire sticking out.

The Georgia Bureau of Investigation was called in shortly around 6 a.m. Slonaker said the GBI team at the scene Friday was a response team from Cherokee County.

“We called them out about 6 o’clock, and they got out their beds and jumped in their truck to get here like I did,” Slonaker said.
The investigation shut down Mooty Bridge Road for several hours, delaying several businesses from opening at their normal time. Slonaker said the LPD worked to clear the scene as quickly as possible, understanding that people needed to get to work.

He said it’s always important to be cautious if you find something suspicious.

“You should always call,” Slonaker said. “We always want you to call.  Stay away from it, get back as far as you can and let us know so we can come out and do a cursory investigation and determine if we need to let the GBI come out and deal with it or not.”

Slonaker said he was not part of a recent investigation involving a suspicious package two months ago on Wynnwood Drive. The two locations are only about a mile away from one another. Slonaker said there were some similarities between the two packages.

“There are multiple leads we can follow up on with this, and I’m going back to the station to do that as we speak,” Slonaker said.

Senate candidate Robertson was found in violation of conduct…