Work officially underway for phase three of the The Thread 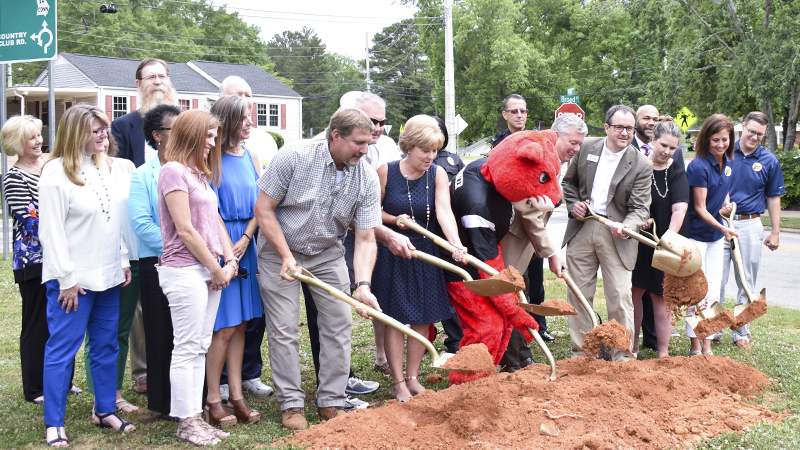 A groundbreaking was held for the third part of The Thread on Monday morning. The third portion of The Thread will be .9 mile long and will connect to the trail at Granger Park. --Alicia B. Hill

Representatives from the LaGrange-Troup County Chamber of Commerce and Friends of The Thread also attended the groundbreaking, marking the next part of the 29-mile trail. The new segment will be .9-mile-long and connect Granger Park and LaGrange College.

“It will truly help connect the college to downtown,” LaGrange College President Dan McAlexander said. “We have been committed to that for a very long time. Certainly, our servant scholars program, which lives between the campus and downtown is a testament to our desire to be a really be a thriving part of a thriving community.”

The Thread is being funded through a combination of donations and SPLOST V dollars. The Friends of The Thread expect 13 miles of the trail to be complete by 2022 according to its website due to the approval of the SPLOST, and officials have celebrated the community support the project has received from the very beginning.

“I believe 300 people showed up for the town hall meeting at Del’avant [two years ago when the project was proposed], and we had presentations, and we heard from The Friends of The Thread,” Mayor Jim Thornton said. “We heard from other stakeholders, and one of the very first people who stood up in the Q and A segment was Dan McAlexander. Dan McAlexander stood up as president of LaGrange College and said LaGrange College is committed to this project.”

The college granted easements for The Thread, and McAlexander said that he believes the trail will strengthen the relationship between the college and the community. He also said it will provide a great opportunity for LaGrange College students.

“LaGrange, the city, has been so supportive of this college now for more than 180 years, and it continues to be so,” McAlexander said. “We are so excited about that. We are also excited because we have as many of you know a very athletic student body who really exists on the kind of exercise they do. Having this opportunity, having our bike share program, it gives them the chance to really have a beautiful view of the entire town and not just be exercising on a treadmill or some such thing.”

Part of the motivation for building The Thread was to create that connection.

“We are now going to build the third segment to connect the model mile here to LaGrange College,” Thornton said. “What is exciting about that to me is not that it is just another phase, but that we are doing what The Thread was intended [to do]. We are connecting parts of the city together, and we will be able to connect LaGrange High School and Granger Park and all of those amenities that exist there, here to the hill campus of LaGrange College.”

“We are very excited to have phase three started. Pardon the progress as you are traveling through downtown,” said Natalie Hale, executive director of Friends of The Thread. “It is going to be phenomenal in the end. The streetscape is going to make Broad Street look even more beautiful than it is now, and we are excited to have more mileage connected to The Thread.”

The third segment of The Thread is expected to be completed by fall 2018.