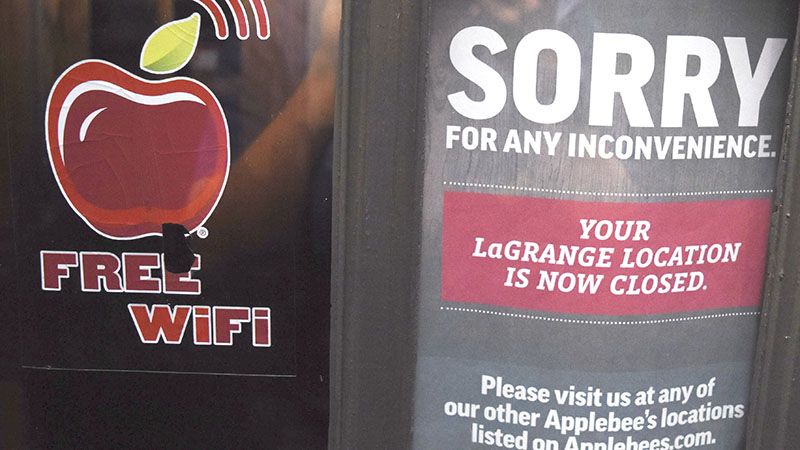 A sign in the window of Applebee’s on Lafayette Parkway indicates that the restaurant is permanently closed. --Daniel Evans

Applebee’s in LaGrange has permanently closed.

An Applebee’s spokeperson confirmed the closure on Thursday. An email response from Applebee’s media relations said: “The Applebee’s restaurant at 1524 Lafayette Parkway in LaGrange closed on May 21, 2018. We greatly appreciate our neighbors’ patronage and look forward to continuing to serve guests at the nearby Applebee’s restaurants in the area. All team members were offered positions at nearby restaurants.”

“Sorry for any inconvenience. Your LaGrange location is now closed. Please visit us at any of our other Applebee’s locations listed on Applebees.com.”

There was no signage left on the building and the the road sign that directs motorists to the location was also gone. As of Monday evening, there were no clues left that the building had ever operated as an Applebee’s, other than the sign in the window.

No vehicles were left in the parking lot, a telling sign for a restaurant that regularly stays open until midnight.

A company spokeperson said in email that closures are a normal part of business operations, especially for a company the size of Applebee’s.

Applebee’s announced in February it would close 60 to 80 locations in 2018, and the brand closed 99 in 2017. A list of locations that would be affected was not released at that time.

“We will do everything we can in partnering with the city and our retail folks and our real estate folks to fill that and find another great outlet for our community and visitors to be able to dine in,” said Page Estes, president of the LaGrange-Troup County Chamber of Commerce.

Estes said LaGrange has worked with Retail Strategies, a company out of Birmingham, Alabama, that represents the community when attracting new businesses.

“Their goal is to match people that are interested in coming to our area with properties that are available or different opportunities,” Estes said.  “They have been wonderful to help us attract various retailers to the community and also help us work through different problems that have arisen during that process.”

According to Troup County property records, Applebee’s first got involved with the property the restaurant was on in 2002, but it is unclear when the location officially opened.

Applebee’s is the second chain restaurant to shutter its door in LaGrange in in the last two and a half months. Ruby Tuesday, which first opened on Morgan Street in 1998, closed in March.