The wait is over: Great Wolf Lodge — estimated to bring in half a million visitors a year — opens in LaGrange 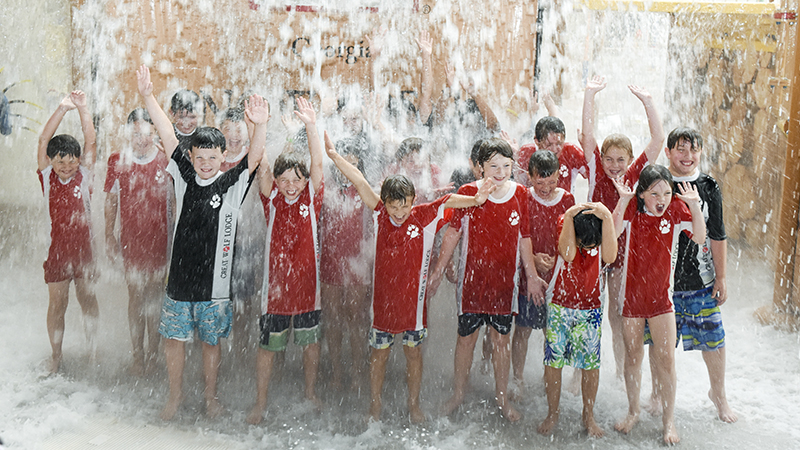 Children get soaked by the bucket at the adventure park at Great Wolf Lodge Georgia. (DANIEL EVANS | Daily News)

The resort, which will bring in half a million visitors a year, is expected to have a major economic impact on the region. It is fully staffed with 710 employees and held a soft opening earlier this month. However, Thursday was the resort’s first official day.

“It is going to have a tremendous impact on LaGrange,” LaGrange Mayor Jim Thornton said. “It already has because of the new jobs that have been created. Lots of people in LaGrange have been working here already, but I think the long-term impact will be the marketing benefit, having this tourism destination here in our community drawing people from all over the southeast.”

Thornton credited late City Manager Tom Hall for helping to bring the $170 million capital investment to the area by reaching out to Great Wolf when Peachtree City denied a rezoning request to allow the resort a little over three years ago.

The resort is now located on the parkway named in Hall’s honor.

“The projections are north of 30 percent of the people who come here are from out of state, which is fantastic from a tourism standpoint, but also — when you look at metro Atlanta and other parts of the State of Georgia — it will also prevent leakage of folks who are going to places that are outside of the state to experience this kind of quality,” said Christopher Nunn, the commissioner of the Georgia Department of Community Affairs. “It is super exciting for the community and for the state.”

Resort administrators said they were excited about expanding into the region.

“We’ve long looked at the southern part of the U.S. and thought that would be a great market for us,” said Murray Hennessy, the Chief Executive Officer for Great Wolf Lodge. “We didn’t have a lodge in this part of the country, and by locating here, we can attract people from up to a four to five-hour drive that would cover Atlanta, Birmingham, Montgomery, Tallahassee, Chattanooga and all of that. It is a great location.”

Reservations at the LaGrange location are already outpacing the last four Great Wolf Lodge locations, and this could prove to be one of the busiest Great Wolf locations for summer 2018.

Businesses outside the resort are expected to continue to benefit from the resort in the future.

“They aren’t all just going to come to Great Wolf and leave,” Hennessy said. “There are tourists who are here to do other things as well. That is a lot of people in the community. That paves the way for an element of other service offerings, and then we built a conference center here for businesses to hold conferences here and bring their employees here, so that should bring further business to the area.”

“It has been so much fun. I just went on Wolf’s Tail, which is a platform that you stand on and it comes out and you fall. It is so amazing,” said Meg Donnelly, the star of Disney’s “Zombies,” who attended the grand opening. “I am so excited to ride the other rides too.”

Donnelly said that visiting the resort was nostalgic for her because she grew up in New York and used to visit Great Wolf Lodge’s Virginia location.

She said that she rode on all 14 of the slides at the LaGrange location, including two styles of slides that are new to North America.

The water park is exclusively for resort guests, but the adventure park includes putt putt golf, mini bowling, a ropes course, climbing wall, arcade and interactive game that are open to the public. All of the on-site restaurants, including Ben & Jerry’s and Dunkin Donuts are also available to the public.

“For the locals, even though the water park is exclusive to overnight guests, the locals can come in and enjoy the restaurant and enjoy the adventure park and come in and have fun,” Furnas said. “I think we have brought a unique fun experience to LaGrange that certainly is helping to cover that need, and I’ve already seen lots of locals coming through.”

To learn more about the resort, visit Greatwolf.com/georgia.