What a career: Nixon retires from TCSO after three decades 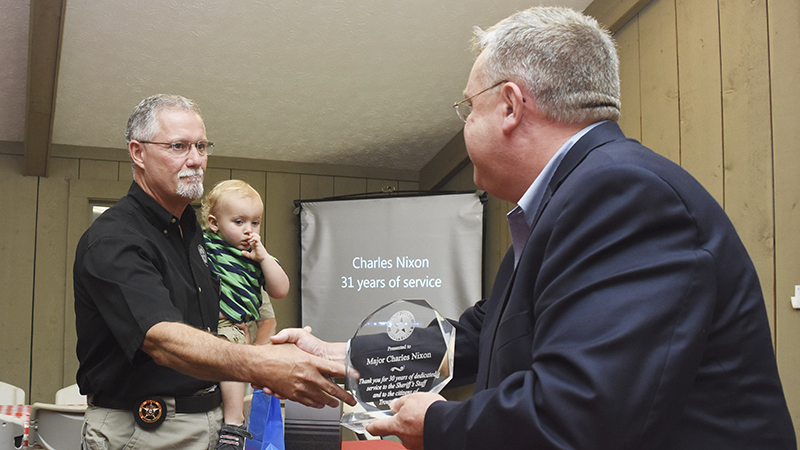 Charles Nixon described Tuesday as one of the greatest days of his life, but also one of the most difficult.

Nixon, a major, retired from the Troup County Sherriff’s Office Tuesday after three decades of service. He served in just about every role in the department and, at one time, was actually the boss of both of his superiors — Sheriff James Woodruff and Chief Deputy Jon Whitney.

“It’s just time,” Nixon said. “I’ve been with the sheriff’s office for 30 years, and I’ve been through probably every division down there. I’ve worked patrol as supervisor, I was in CID, I was chief investigator at one time, and I’m the major now. It’s time to enjoy life a little bit and enjoy my grandkids.”

Nixon said he’ll use the extra time to see family, go camping and work more on old cars. He has four children and eight grandchildren who look forward to seeing him more.

“Charles has always led by example. He was never one to say ‘you just go do it and do what I say.’ He was one to go out and do it with you,” Woodruff said. “He answered as many calls and made as many arrests and wrote as many reports as anyone on his shift. And that’s what people, especially me, always admired about him and appreciated was the fact that he led by example.”

Members of the sheriff’s office and the LaGrange Police Department spoke about Nixon at Tuesday’s ceremony, which was held at the Troup County Agriculture Building. There wasn’t an empty seat in the room.

Understandably, when it was Nixon’s turn to speak, he had to fight back tears.

Woodruff said Nixon was always one of the people he knew he could count on.

“He has been one of those invaluable people in that inner circle who has given me council in these six years that has really made us so good at what we do and so respected in the community,” Woodruff said. “There were a lot of times I’d go to him and ask what he thought about a situation, understanding that he probably had more knowledge about a lot of things than I did.”

Keith Flory has been promoted to major, taking over Nixon’s position.

Flory started with the sheriff’s office in 2004, working in several different departments before starting his own business.

He returned in January.

Flory said he’s learned a lot from Nixon and plans to use that knowledge moving forward.

“He was a lieutenant when the sheriff and I first came here, so for somebody to be in that position for that long. To be able to learn from them, it’s an amazing thing. You just don’t get that kind of instruction anywhere else,” Flory said.

Nixon said if there’s any advice he would give to young deputies, it would be to remember to treat people fairly.

“I’ve been here 30 years, and I’ve always treated people the way I want to be treated,” Nixon said.

The wait is over: Great Wolf Lodge — estimated…