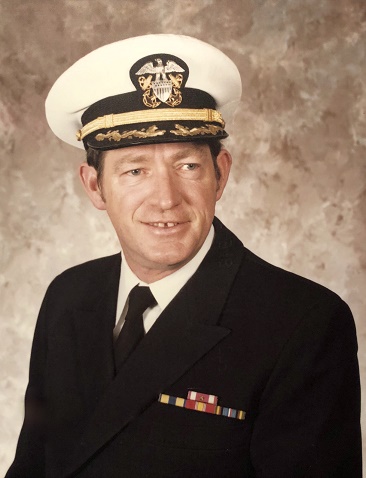 John James Davis, CDR, USN (Ret.), passed from this earth on Saturday, May 19, following a valiant two-year battle with cancer. He was at his home in Hartfield, Virginia, with his loving family by his side. Born Jan. 23, 1938, in LaGrange, Georgia, to parents Grady Washington Davis and Emma Phillips Davis, John was the third of seven children.

He is survived by his wife, Lee Brookshier Davis; children, Cheryl and Don Royal, Patrick Davis, Sabrina and Kurt Klunder and Michael and Debbie Moscoso; grandchildren, Amanda, Jessica and Caroline Royal, Maile Davis, Kelsey and Lindsey Klunder and Erin and Melissa Moscoso. He was preceded in death by his oldest son, John-John, in 1992.

Though John’s life started very humbly, he poured himself into his education and went on to earn his bachelor’s degree from the Georgia Institute of Technology in 1961, while on a U.S. Navy ROTC scholarship. In 1962, John was deployed during the Cuban Missile Crisis, running supplies for the blockade. Following his initial years in service, John returned to school and earned his master’s degree in business administration from Harvard University in 1969. He later graduated from the U.S. Naval War College in 1976. John served his country for 20 years and completed his military career at the Pentagon, retiring at the rank of commander in 1981. Over the span of his Naval career, John earned the National Defense Service Medal, the Meritorious Service Medal with Gold Star, the Navy Expeditionary Award, and the Armed Forces Expeditionary Medal. Following his military service, John went into the private sector and eventually became the Chief Operating Officer of CACI, International Inc. in Arlington, Virginia, overseeing thousands of employees. He retired from CACI in 2004, and moved to Hartfield, Virginia, along the shore of the Chesapeake Bay, where he enjoyed spending time with his family, especially when his granddaughters came to visit. John was a good man, who served his family and country well.

Though the past couple of years were extremely difficult, he fought bravely, never giving up hope, and always maintained his wickedly sarcastic sense of humor until the very end.

A few days before John passed, Father Stuart came to visit and give him communion. John looked up from his bed with that big grin of his, shook his finger and jokingly said, “What have you done for me lately? I thought you were going to get me out of this mess!” Even Father Stuart couldn’t hold back his laughter. John will be laid to rest at Arlington National Cemetery, with Full Military Honors. Faulkner Funeral Homes, Bristow-Faulkner Chapel, Saluda, is assisting the family.