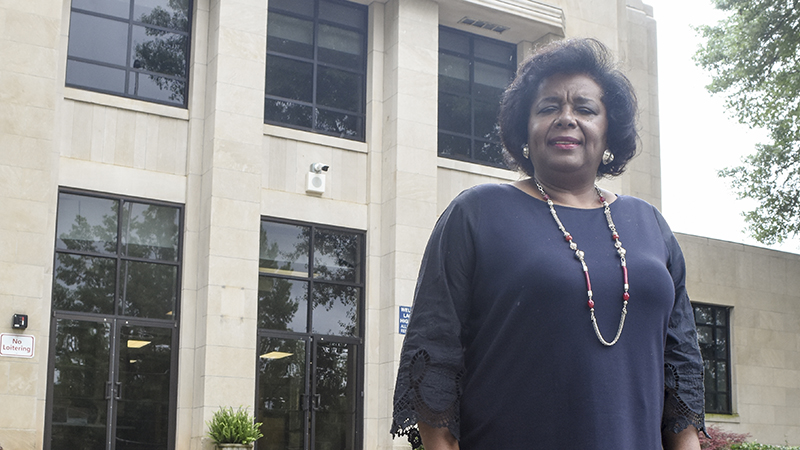 LaGrange High School counselor Bernice Thomas poses for a photo in front of the school on Tuesday. Her final day will be June 15. --Daniel Evans

Bernice Thomas is looking forward to setting her own schedule, planning her own days and enjoying retirement by doing whatever she wants to do. But, after 43 years working in schools, she also knows it’s going to be difficult to be away.

Thomas has spent the last 17 years as LaGrange High School’s counselor, which followed 26 years in a variety of roles for the Lee County School System in Alabama. On Saturday, she watched her final group of students graduate.

“At graduation, I got there over an hour early. I just sat there in my car because where I was parked I could see the students,” Thomas said. “I was reminiscing and my eyes got teary, just knowing where they’ve come to where they are now. My eyes got a little full.”

Thomas said she believes in a time and season for all things, and that now is the right time for her to retire. She and all other Troup County School System retirees were honored at a ceremony earlier this month. Out of the 40 plus retirees, nobody had put in more time than Thomas.

She said she hopes students will remember to make good choices, which is the slogan she lives her life by.

“That’s what life is all about. It’s about a series of choices and consequences for every choice you make,” Thomas said.

“It goes back to your A,B,C’s — attitude, beliefs and choices.”

Thomas said students at LaGrange High are divided up by alphabet, so she’s always had students whose last names end in G through M. She calls them the “gems.”

Thomas said she never expected to be a counselor, but after 26 years in Lee County she retired so she could work in Troup County, where she had moved after meeting her husband Perrin. She applied for the LaGrange High counselor position and started in 2002.

She gets emotional thinking about the hard times many of her students went through.

She plans to spend retirement with her 15 grandchildren, taking a religion class and doing volunteer work in the schools and at the hospital.

She said working in Lee County and living in LaGrange prevented her from going to many of the afterschool activities her three children were involved in, but now she’s determined to go to everything she can for her grandchildren.

“I want to be able to go to their programs and help in their classrooms,” Thomas said. “I didn’t get a chance to do that stuff. It’s like living vicariously through my grandbabies because I couldn’t do it.”

Thomas will officially retire on June 15.