Doughnut truck’s misfortune leads to 4,000 treats being given away on National Doughnut Day 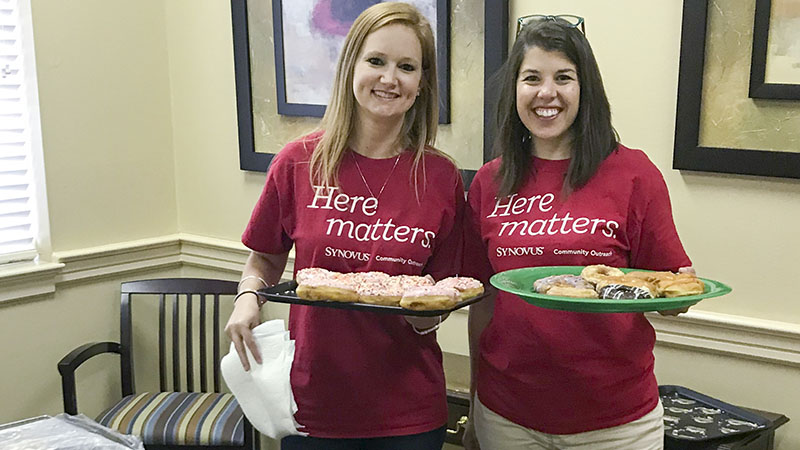 The LaGrange Police Department and other volunteers gave out roughly 4,000 doughnuts on Friday. (Contributed)

When LaGrange Police Sgt. Marshall McCoy received a call on Friday morning asking if he could do anything with some doughnuts, he thought it was a prank in honor of National Doughnut Day.

However, he soon realized that the roughly 4,000 doughnuts at A LaGrange Towing were no joke and began to hand them out to local shelters, daycares, banks and Twin Cedars.

“At first I thought he was kidding because you hear about all these silly national days,” said McCoy. “He said he had a bunch of doughnuts, and I was expecting some boxes of doughnuts to give away, and of course when I got there it was a lot. I didn’t think we were ever going to run out of doughnuts.”

The doughnuts came from a truck that was in an accident in LaGrange. The owners of the doughnut truck did not wish to be named, but they did want the doughnuts to go to a good cause.

“We had truck that was involved in an accident last night, and the people asked us to distribute [the doughnuts] out and take care of people, so that is what we did,” said Terry Stanford, the owner of Stanford Automotive, which is affiliated with A LaGrange Towing.

“We called Marshall McCoy, got him to come in, and he helped us find locations that needed doughnuts. We just started giving out to everybody.”

Stanford said that he immediately thought of McCoy and the LPD when he started looking for a way to give the doughnuts to good causes.

“They have an awesome outreach program, Community Action [for Improvement], and he is really good with that,” Stanford said. “We’ve participated in National Night Out with them.”

McCoy said that he was grateful to Stanford for reaching out to help the community with the LPD.

“It is about partnering with the community, so we are appreciative when local businesses like what Terry does get these opportunities and say, ‘hey, I want to partner with the police. They can help me do this,’” McCoy said.

Stanford said that the donation had a major impact on the children at Twin Cedars, and he hopes to see more people step forward to help them in the future.

“I think it has a lot of impact on them with all the stuff that is going on,” Stanford said. “A lot of people don’t even know that we have that facility here, and it is a great facility for the kids. I think that just them seeing law enforcement come in and bring stuff to them [has a positive impact].”

Despite the large number of doughnuts and the LPD’s role in distribution, McCoy said that none were taken to the police department.

“We did not bring any doughnuts to the police department,” McCoy said with a laugh. “These guys have been working really hard down here to get in shape.”

Many LPD officers, along with other city employees, have been working on developing healthy habits as part of Go365, which rewards employees for those healthy practices.  McCoy said that many LPD officers have been eating healthy, exercising and losing weight under the program, and he did not want to provide temptation in the form of a tray of doughnuts.

Four Hogansville properties to be auctioned