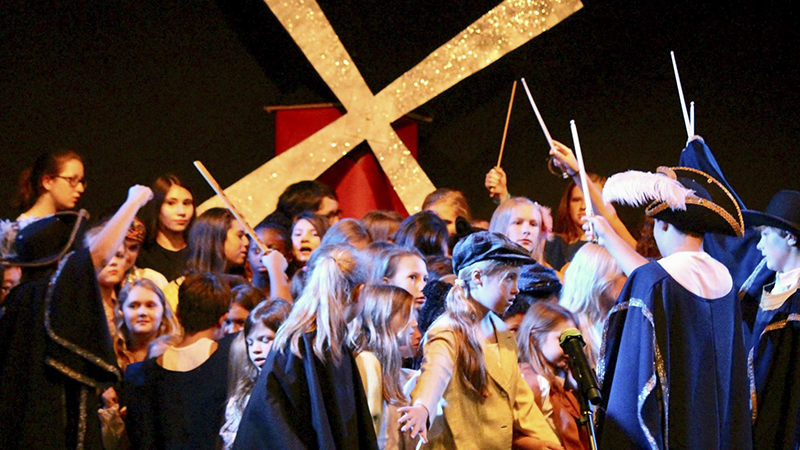 On Monday, June 18, New Horizon Theatre will open its doors for the ninth time for students ages 6 to 15 to immerse themselves in the performing arts. NHCT partnered with professional performer and educator Julia Langley eight years ago to create a camp which covered various aspects of the performing arts — choreography, acting, singing, tech/backstage work, writing and stage etiquette.

The camp allowed students of all ages to try different areas of the arts in a positive environment. Ms. Langley, who currently lives in Delray, Florida, when she’s not traveling the world performing with Cirque Productions or hosting camps in other locations around the United States, chose New Horizon Theatre for her first camp director experience, as West Point is close to where she grew up.

She has returned every summer since to provide a bigger and better camp year after year.

“I truly believe that allowing children to grow up in theater makes a huge difference in their ability to speak publically and to think of creative solutions to problems — both of which are life lessons that can be applied in numerous areas,” states Holly Wheeler, NHCT Marketing Assistant.  “As the mother of two active teenagers, I’ve attended numerous events involving students, and almost without fail, I can pick out the students who have spent time in theater.  They are just more comfortable in front of a crowd and usually much easier to hear and understand when they speak.”

Over the years, Ms. Wheeler has seen kids come through the Performing Arts Camp who were shy and unsure of performing, only to discover that they love being on stage and becoming a character. And it’s not always about the spotlight, as some students have found an interest in handling backstage roles, managing lighting, writing and directing.

The NHCT Performing Arts Camp has doubled in size over the years and with the newly renovated theater space, has the room for additional breakout sessions and larger audiences for the showcase performance. This year’s theme, “Rockin’ Around The Clock” will bring back the fun and nostalgia of the “Happy Days” of the 1950s. This year’s theme will feature scenes and songs reminiscent of great musicals such as “Grease,” “West Side Story” and “All Shook Up.”

The campers will be divided into two groups (older and younger) and NHCT will host a showcase performance on Saturday, June 23, to show parents and family members what campers have learned throughout the week. Haley Hamer is returning as assistant camp director and there is a group of talented counselors signed on who love the arts.

The cost for this unique experience is $175 per camper with family discounts available for siblings. The camp is from 9 a.m. to 4 p.m. ET Monday through Friday (June 18-22) with the showcase performances on Saturday, June 23.

The space is limited so visit Nhct.org to sign up a camper.  Wheeler is also available via email at hwheelernhct@yahoo.com.

Beekeepers to hold annual competition at Market on Main