Take a Warrior Fishing has successful sixth year on lake 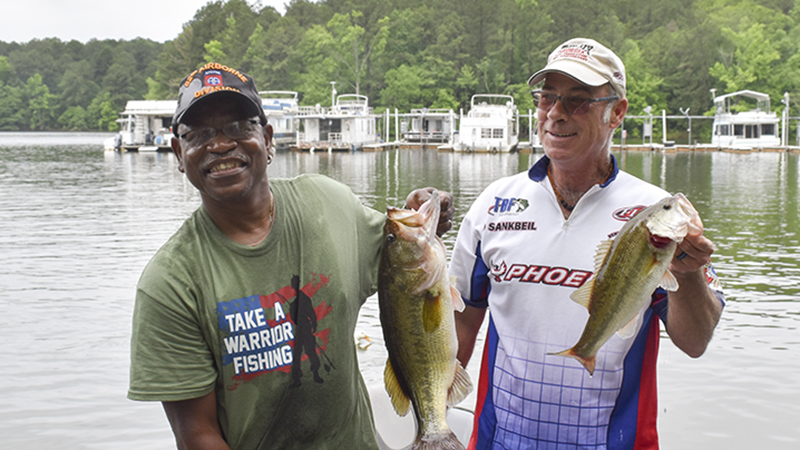 Fishermen and veterans alike reeled in a good time on Saturday with the sixth annual Take a Warrior Fishing Tournament on Saturday.

This year’s event drew a crowd despite the rain, and participants said that they had fun — even those who didn’t catch anything but the sunrise.

“It was wet with the rain, but the most important thing was we were on the water,” said Nathaniel Coakley, a U.S. Army veteran and president of the Ft. Benning Wounded Warrior Association. “Sometimes it is not important whether you catch a fish, the point is that you got the opportunity to relax and relieve stress and take your mind off of everything and other things that are going on in life.”

The Take a Warrior Fishing program is part of the Catch A Special Thrill for Kids Foundation. The program was established in 2011 to support military personnel and their families.

“We do these events around the country for veterans and try to get them out on the water and give them a day of fishing and fun and boating,” said Jeff Barnes, the eastern regional director for the C.A.S.T. for Kids Foundation. “We have a lunch for them. This is our sixth annual event here at West Point Lake, and we are having a great time.”

More than 50 veterans registered for the event, and even with heavy showers early in the day, 34 still participated

“When they come back in at 11:30 a.m., they are all smiles because some of them have never fished before,” said Rebecca Fink, a natural resources specialist at US Army Corps of Engineers. “Some of them have never been on a bass boat before, let alone been in a tournament, so when they get the weigh in, and the pretend atmosphere that they are in a tournament, it is really something different for them. There are so many social interactions and friendships that are made.”

This was Fink’s fifth and final year organizing the event at West Point Lake, since she expects to live in another location before next year’s tournament.

“This has continued to be my favorite event that I manage,” Fink said. “I usually manage around three very large scale events, and although this one has the lowest total number of participation, it is one of the most important ones to support our active duty military and veteran communities.”

Other organizers felt the same way.

“It is just good to be able to get out here with these guys,” said Greg Oleson, an organizer. “They give so much for our country, and we get them out there for a little time for a little relaxation, a little fun. I’m just appreciative of what they do and grateful that I can give back to them a little of my time.”

Tournament organizers also consider it a way to introduce veterans to a relaxing, new hobby while showing community support.

“They need to feel like communities are there for them, and they are not forgotten,” Barnes said. “They want a day where they can go out and fish and just be rewarded in a way for their service. I think it is a great way to give back to some of these veterans that have put in a lot of time.”

Participants in the tournament received a rod and reel, tackle bag and t-shirt from the Take a Warrior Fishing Foundation to make it easier for them to pursue fishing as a hobby after the event.

“We hope that the impact that is made by this event will be that maybe some of those who haven’t fished as much in the past maybe they can continue and enjoy [fishing],” Barnes said. “That is what I personally would like to see is that they continue fishing and enjoying it and maybe share it with their children and their families too. So, it is a big impact.”

The organizers thanked all of this year’s sponsors, especially Highland Marina, who provided a location and lunch for the event. They also thanked everyone who volunteered.

“To see this much participation is overwhelmingly supportive. There is always a thought when we start planning this event in February that we may not see that participation, but they always pull through right at the end,” Fink said. “All the warriors that have wanted to come, have come, and we usually have extra boat captains waiting to actually take them on the water.”

To learn more about Take a Warrior Fishing, visit Castforkids.org/project/twf-program/.