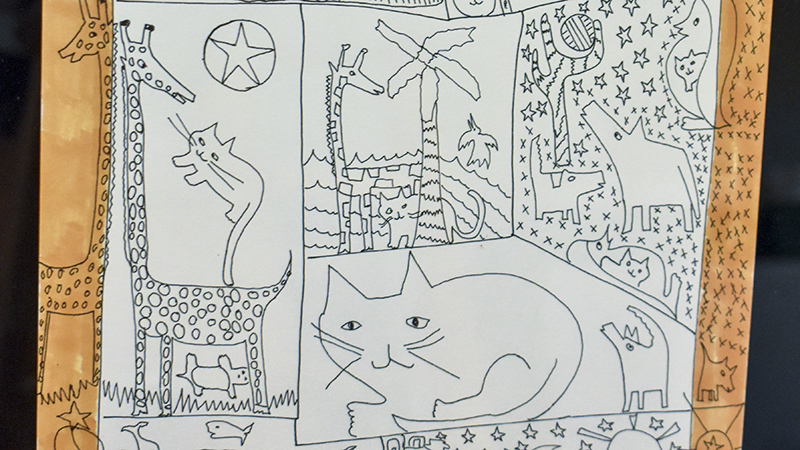 A blue barn can be seen through the trees on Hammett Road, and while no giraffes could be seen peeking through the window Monday afternoon, a menagerie of animals danced across the small studio.

The Giraffe House Artist Studio sits only a mile from the nearest gallery that displays its art, but for artist Elizabeth Sims, it is the perfectly placed away from the hustle and bustle of life. The studio’s name started as a joke with visiting friends, but after a while, the name just stuck.

“My friend Nick Woodson, who I’ve known forever, he would always come in the drive and look down and see that barn, and then he’d say, ‘that’s the giraffe house. They are going to stick their heads out of the little window upstairs,’” Sims said. “So, I went on about it, and without even realizing it, I started calling it the Giraffe House. I put Giraffe House on all my business cards.”

The name is appropriate considering the giraffes featured in many of Sims’ works alongside cats, alligators, turtles and other animals.

“I do [draw] animals. I haven’t drawn a person in many, many years,” Sims said. “In fact, my sister-in-law about 10 years ago said ‘I didn’t realize you could draw people.’ I said that when I got my graduate degree, I stood up for five days a week, two hours drawing models for two years. Now I use the drawing skills to draw the animals.”

“I was there during the Lamar Dodd era, and I worked at the graduate museum in ’67,” Sims said. “I worked for Dr. Dodd.”

After college, Sims worked as the head of the art department for two years at what was then called Macon Community College. She left the college after getting married, so that she and her husband, Larry, could move to California. When the marriage ended amicably several years later, she moved back home to LaGrange where she would work in local junior highs before moving on to the LaGrange Memorial Library.

“Mother fixed me a studio here, which I’m still messing with, and I lived with her for a time, which was really great,” Sims said. “She would title all my work. I always hate to [write] titles, but it offends people [if they are untitled].”

She has created black and white original works for decades, embracing the relationship between lines and paper, but she has also recently begun to add color to her work.

“I had always worked in black and white since I had been in LaGrange, ever since about 1978,” Sims said. “I never used color, but people would say, ‘why don’t you use color?’ And I said because I really just don’t want to. Now I tell people the honest to God truth — I draw pictures then I color them in just like a coloring book. I make lines that I want to stay in.”

Sims built her studio using her father’s old barn in 2010, and it has become the place that she goes to create the world that she wants to see through her art.

She said that she uses her art to face her mental illness in a positive manner.

“I think that the mental illness has helped me with my art,” Sims said. “I go to psychotherapy, and I’ve gone since ’75. I have had the same therapist. He calls me up on the phone, and we talk, and he handles my medication. Medication is really important.”

She said that working with art through her mental illness has made her art stronger.

“I feel like it has gotten me to a different place in art that I couldn’t get to before,” Sims said. “I don’t know if you could say it’s beneficial, but it has helped me to understand through therapy.”

Sims’ work can be found at 809 Gallery of Art on Hill Street in LaGrange and at the Cat’s Meow in Pine Mountain. To learn more about Sims, visit Vaalart.com/elizabeth_sims.html

Playing their way to Success by 6