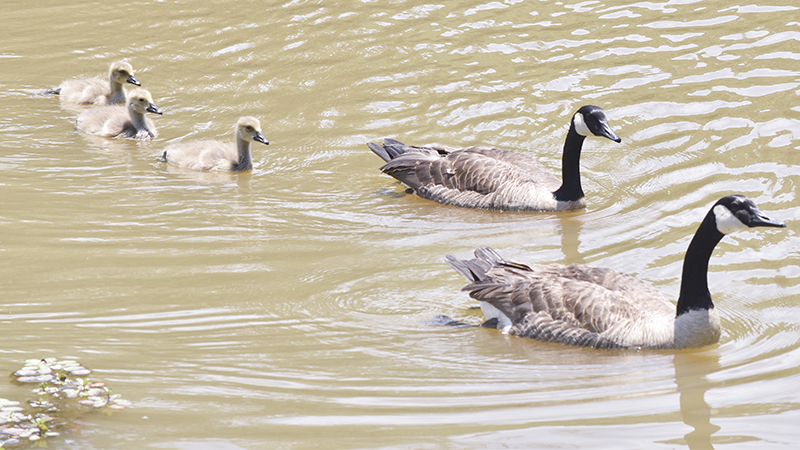 The Friends of The Thread Trail are asking that people stop feeding the geese at Granger Park. Experts say that feeding the geese makes them aggressive, especially when others walk by without food. --Alicia B. Hill

The Friends of The Thread Trail is requesting that locals stop feeding the geese at Granger Park.

Geese who are regularly fed by people can become aggressive and may contribute to water borne diseases. Regular feeding can also lead to overpopulation of geese at one location since the geese will want to stay near an easily available source of food, even if it is not good for them.

“The nuisance issue is concentrating those geese in areas where people are, and the geese lose their fear of humans,” said Greg Balkcom, state waterfowl biologist for the Georgia Department of Natural Resources’ Wildlife Resources Division. “They start expecting food from everybody who comes up, even those that aren’t there to feed them.”

That expectation can lead to aggressive behavior from the geese.

“They start expecting food, and then the geese can get aggressive if you don’t have anything for them. They can come up and get aggressive toward people,” Balkcom said. “They can bite. They pinch. They grab you with a bill and twist and pull away. They can hit you with wings, scratch you with their feet. They usually cause, not big damage, but they can hurt you when they get after you.”

The geese have already attacked some ducks near the pond.

“[Earlier this week] someone dumped out six ducks at the pond, and the geese have killed one of the ducks already and injured another one,” said Natalie Hale, the executive director of the Friends of The Thread Trail.

“These geese have gotten out of control.”

Balkcom said that residents should give the geese space, especially if they behave aggressively, and he pointed out that people are not the only ones put at risk by feeding the geese bread.

Canadian geese generally eat green vegetation and grains in the wild. The nutrition from that natural diet is necessary to ensure that they have strong muscles and bones that will allow them to fly.

“There is a condition called angel wing in geese, where the wing and feathers didn’t develop the way they should, and they lose that flight ability,” Balkcom said. “Without proper nutrition, that is one of the things that can happen.”

Residents are encouraged to simply enjoy watching the geese swim and walk by the pond.

“The natural habitat out there is what the birds need because when they feed on the bread they stop eating the natural food sources, which are more nutritious,” Hale said. “Then the birds become malnourished, and then they develop diseases. So, it really is harming them by feeding them.”

Balkcom said the geese will probably start leaving people alone after not being fed for a while, but the geese currently at the pond will probably remain there until the end of molting season.

“They know where the safe areas are, and they concentrate in the safe areas to go through the molt, which will be starting in the next week or two on through mid-July,” Balcom said.

“They’ll go through the molt, lose those flight feathers. They won’t be able to fly for a period of three to four weeks. They are starting to concentrate right now, and that is probably what you are seeing in these retention pond areas.”

Hale said that there are currently about 30 geese and five ducks living at the pond by Granger Park.