Litter in the lake: Local groups talk about how trash gets into West Point Lake 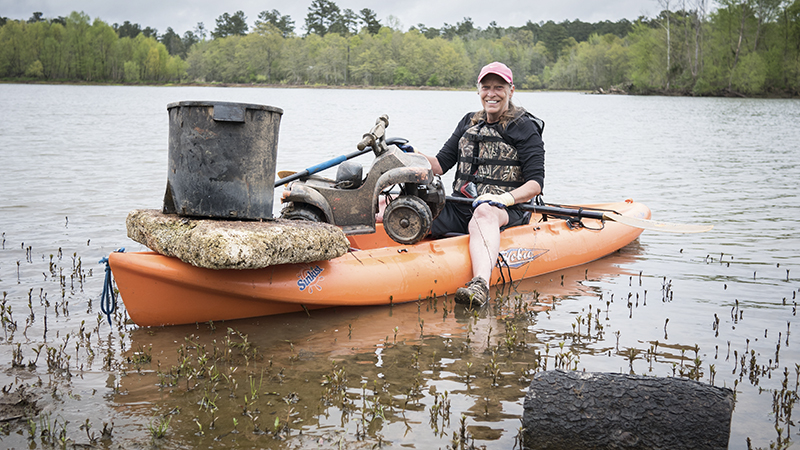 Tisha Brangan shows off a few of the items she pulled out of the river at the eighth annual Sweep the Hooch in April 2018. (Contributed)

With temperatures rising, locals and visitors alike have begun to visit West Point Lake more often, but some have found the trash in or near the lake to be less than welcoming.

According to the Chattahoochee Riverkeeper and the U.S. Army Corps of Engineers, litter on the lake is anything but a new problem. Groups have worked to clear debris from the lake for decades, but even with increased awareness in Troup County, litter continues to flow downstream into the lake.

“These months of May and June, these heavy rains and the lake going to full pool tends to flood out a good bit of trash that may have been collected on the shoreline over the winter,” said Henry Jacobs, the middle Chattahoochee outreach director for the Chattahoochee Riverkeeper. “So, for people out on boats it is hard to miss, especially right after these rains.”

While some of the litter in the lake and local rivers is from local sources, much of the litter is from upstream and has been washed downstream by recent heavy rain.

“Every small stream, creek, even drainage ditches from within that [metro Atlanta] area lead into the river and down to our lake where unfortunately the trash — as it floats along — hits our waters,” said David Scott, chief ranger with the Army Corps of Engineers. “Once it hits our lake, it stops moving by water flow. It starts moving by wind flow, and so, it gets down to the main lake and starts sitting stagnant. Then the winds — from whichever direction they come — blow it out of the lake and into coves.”

Those coves can be difficult to reach for volunteers hoping to pick up trash on foot when the lake is above pool level, like it is currently.

That trash in the river and lake can also be the result of roadside litter being washed into local creeks and rivers and eventually West Point Lake. Because of this, litter in the lake is tied to litter in other areas, which is unfortunately nothing new.

“All this trash comes in from roadways and from towns and people who fish along the river north of us and around the lake, and it is just a continual process of moving down further,” said David Barr, supervisory park ranger of the West Point Lake U.S. Army Corps of Engineers. “Every time the lake level comes up, it picks it up and floats it down river. So, nothing has really changed.”

This litter and debris can impact local businesses.

“When all the stuff comes from Atlanta, it comes right down the Chattahoochee, and people trying to go on the lake fishing [have to face] stumps and trees and bottles and tennis balls floating,” said Larry McManus, manager at Highland Marina Resort.

McManus estimated that there are thousands of tennis balls from Atlanta in West Point Lake in addition to other trash that washes downstream. He said that he does not believe that the trash impacts whether first time visitors stay at the resort, but it could be a deciding factor on whether to return.

Most groups are planning efforts to pick up trash once water levels go back down, and it is safer for volunteers to walk along the shoreline.

“I’ve been in contact with the City of LaGrange, the Corps of Engineers and some businesses and people who see the trash in the lake and want to do something about it,” Jacobs said. “Right now, the conditions aren’t great to be doing cleanups on the lake, just out of concern for the safety of the volunteers. With high lake levels and a lot of rain, there have been safety issues with being on the river upstream of West Point Lake.”

To read more about what is being done to clean up the litter in West Point Lake and what you can do about it, read Wednesday’s edition of the LaGrange Daily News.