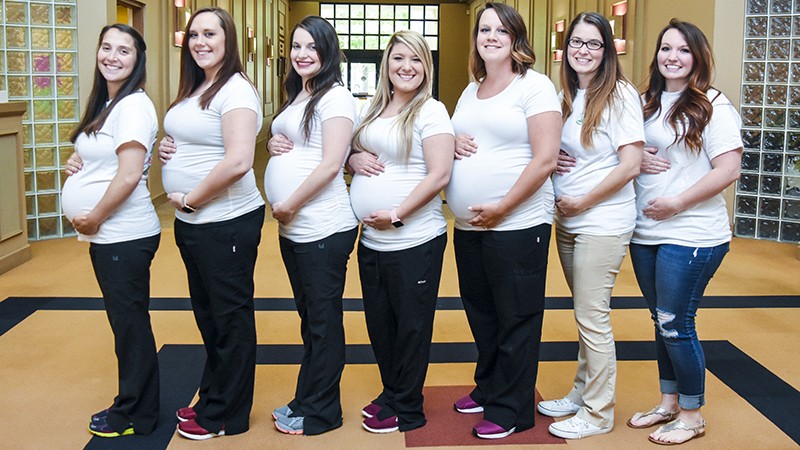 There’s going to be more than a few baby showers at LaGrange Internal Medicine over the next seven months.

Around one-third of the nurses at the facility are pregnant, and three of the seven have due dates that are only one day apart. Dorathy Pike is due first on July 31, followed by Brittney Lynch on Aug. 17.

October figures to be busy, especially for the nurses who aren’t pregnant. Courtney Wilson is due on Oct. 2, Courtney Richardson on Oct. 3 and Malorie Monteith on Oct. 4.

“We just felt bad for our boss,” Montieth joked. “I’m pretty sure she pulled her hair out.”

Amy Bowling is due Dec. 26, right in the midst of the holiday season, and Isla Sprayberry is due on Jan. 16.

“It’s my fault,” said Courtney Richardson, raising her hand. “We were kind of joking around because Malorie’s husband and my husband are best friends. We were talking about us having a kid, and I kind of jinxed Malorie. I found out I was pregnant, and a week later, she found out she was.”

When Wilson, Richardson and Monteith are out, it’ll be a challenging time, but the nurses all believe they’ll have plenty of hands on deck to pick up the slack.

“As long as there is not more than three at a time, we should be OK. We hired a couple of nurses,” Montieth said. “We are the only three that are not staggered.”

The nurses agreed there are benefits to being in an office with six others who can understand what they’re going through.

They’ve all shared plenty of TUMS and each has benefitted from another’s cravings.

“Just make sure you buy the econo-size so that everybody can share,” Montieth said with a laugh.

Wilson, Richardson, Lynch and Sprayberry are all having their first child.

Right now, girls are leading the tally 3 to 2, but Bowling and Sprayberry’s babies will serve as the tiebreaker.

“I think it’s a blessing to get to go through it with others,” Pike said.