Shared spaces and sharing art with the community in downtown LaGrange 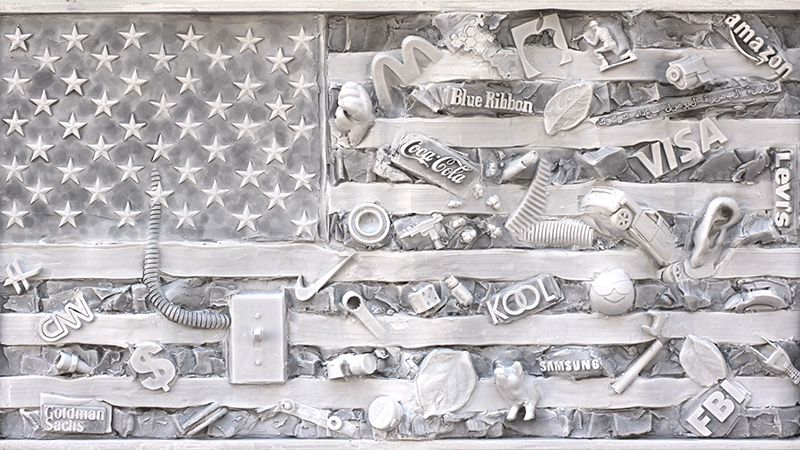 New York sculptor Bob Clyatt plans to create a sculpture in his Shared Spaces Study in LaGrange in a similar style to his piece shown here. (Bob Clyatt | Daily News)

On June 22 and 23, citizens of LaGrange and the surrounding area will be able to participate in a collaborative public art project at the Cochran Gallery on the square.

The project is titled Shared Spaces, and it is being led by New York sculptor Bob Clyatt. The Cochran Gallery, LaGrange Art Museum and Downtown LaGrange Development Authority are collaborating on the project.

Shared Spaces is a free art workshop designed to incorporate community ideas and interests into an American flag sculpture made of plaster and Carrara marble. Anyone can participate in the project by bringing a three-dimensional object that symbolizes to them who the people in the neighborhood and country are or another meaningful symbol that can be pressed into the clay. Objects between one and six inches are suggested.

“It really can be anything,” said Laura Jennings, the executive director for the LaGrange Art Museum. “The questions are all over the map. They are supposed to be conversation starters, and he will video record people. … It is a way for him to get out of his community in New York and get to know what is on the minds of Americans.”

Objects should be fairly firm, not soft or crumbly. Some of the suggestions for choosing an object include: What is the biggest or most notable employer in your area or in the state? What do you think makes Georgia stand out? What is distinctive about it in your mind compared to other states? What is one product or service you cannot imagine living without? What do you like to do for fun?

“The beauty of this method I worked out, which combines about six different well-understood sculptural methods in a novel way, is that anyone who’s interested can directly participate in the creation of a piece, and still have it look good,” Clyatt said. “Once I set it all up, people will be able to bring objects or select from those I’ve assembled, and we will incorporate casts of them into the finished piece.”

He said that this method of creation is a great way to incorporate a variety of perspectives and interests.

“The contemporary art world is always trying to figure out how to be more inclusive, how to involve people in the conversation who might not have been the sorts of people you’d go to a museum and expect to find their world reflected there on the walls,” Clyatt said. “So that’s been a priority for me and everyone, but the fact is it’s really hard to take someone who might not have any art training or art experience and find out how to involve them in expressing their reality through art.”

Those involved in the project hope that a wide variety of people will participate.

“He wants people from all walks of life, and that is hard for me because, my acquaintances are very much so like me,” Jennings said. “They might be younger or older, but they are often like me, and I want to find other people to be involved that aren’t like me.”

The location of the Shared Spaces project at the Cochran Gallery was chosen specifically for its potential to bring in visitors from all walks of life, since it faces out onto Lafayette Square.

“Bob Clyatt’s American flag project brings excitement to downtown. It gives our community the chance to interact with a professional artist and create a work of art that represents the interests of our community,” said Barbie Watts, the director of promotions and marketing for the Downtown LaGrange Development Authority. “…  We look forward to watching this sculpture of the American flag evolve and encourage the community to stop by The Cochran Gallery to view the creative process on June 22 and 23.”

Starting at 4 p.m. on June 22, Clyatt will begin the cast work portion of the project, which is also open for the public to view. He will continue working on the sculpture on June 23.

Clyatt chose to create the sculpture in LaGrange because his grandparents were from Meriwether and Troup counties, and he said that he hoped that this project could bridge some of the cultural divide between New York and Georgia.

“The genesis of this Shared Space project was really a growing frustration with what felt like a widening gulf between the ideas I was hearing in New York and in my Facebook feed and from friends and family around the country,” Clyatt said. “I felt like the rhetoric and division was making us vulnerable, and maybe as an artist, there was a way to do something creative and constructive.”

The completed sculpture will be on display at Sweetland Amphitheatre in the Boyd Pavilion during the Red, White & Blue Friday event starting at 6 p.m. on June 29.