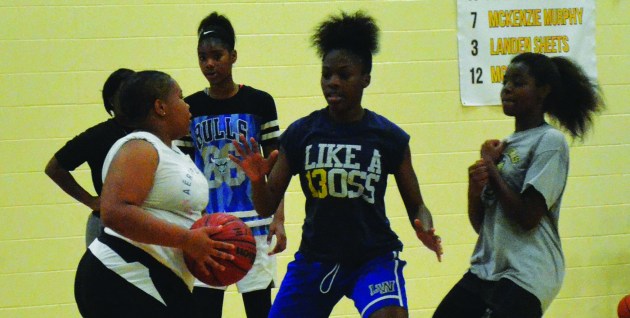 For three days each week, the doors are open.

Troup High girls’ basketball coach Carla Thornton is holding voluntary workouts throughout the summer, and her hope is that most of the members of the team will take advantage of the opportunity.

Troup, which is coming off a winning season that ended with a loss to Pickens County in the opening round of the state tournament.

“I try to go Tuesday, Wednesday and Thursday so it doesn’t interfere with their travel ball,” Thornton said. “I know that’s important, too.”

For the first workout of this week, there were around 10 members of the team in attendance, and they were on the court for two hours.

Thornton keeps the players moving, and she even gets on the court and runs with them.

“The summer, we get a chance to work on more individual skills,” Thornton said. “Once the season rolls around, you’re working on offensive sets, defensive sets, trying to counter what the other team does. Now, we just focus on us, getting good at what we do.”

The summer is a bit more laid-back since there isn’t an immediate game to prepare for.

“Mine know it’s not going to be like this during the season,” Thornton said. “It’s voluntary, so you try to have a good time and still make it competitive.”

Thornton has been encouraged by the presence of a number of freshmen during the summer workouts.

It’s particularly valuable for those players since they’re making the transition from middle school to high school.

“I’ve got eight freshmen coming,” Thornton said. “That’s huge, to go ahead and install the system. I let the middle-school coaches do their thing. I don’t try to force anything on them. So we get them over here and work on our system and get them comfortable with what we do. And they get used to the speed of the game, and the physicality of the game.”

Among the veterans who have been coming to workouts is rising junior Amber Gilbert, who had a big sophomore season after undergoing knee surgery last summer.

Gilbert, who was selected to the Georgia Athletic Coaches Association all-state team following the 2017-2018 season, will be a focal point of next season’s team.

Thornton has been pleased to see Gilbert embracing a leadership role.

“She’s stepping up and being a leader this year, so that’s great,” Thornton said. “You kind of see now that’s in on her, and a lot of people look up to her. So I’m proud of her from that aspect, too.”

Gilbert, who is also playing AAU basketball during the summer, helped lead Troup to a successful season, although she said there is room for improvement.

“We just have to play defense, and have no turnovers like we had last year,” Gilbert said. “Because that’s what killed us.”

While Gilbert is a capable scorer, Thornton said “she’s real selfless. She makes sure to get everybody involved.”

Troup, after enduring some difficult years, has put together back-to-back seasons with winning records, and the program is on the upswing.

Thornton has been Troup’s coach for nearly 10 seasons now, and she has enjoyed her share of success.

Most notably, Thornton was the coach on the 2011-2012 team that won a region championship and advanced to the quarterfinals of the state tournament.

While Thornton takes plenty of satisfaction in seeing her teams win, to her the job is about more than what happens on the court.

“I try to do more than coach,” she said. “I try to teach young women. I think I’ve been doing pretty good at that.

“Everybody does their job differently. I love to win. Don’t get me wrong. But to see them grow and get further in life, that’s amazing to me.”