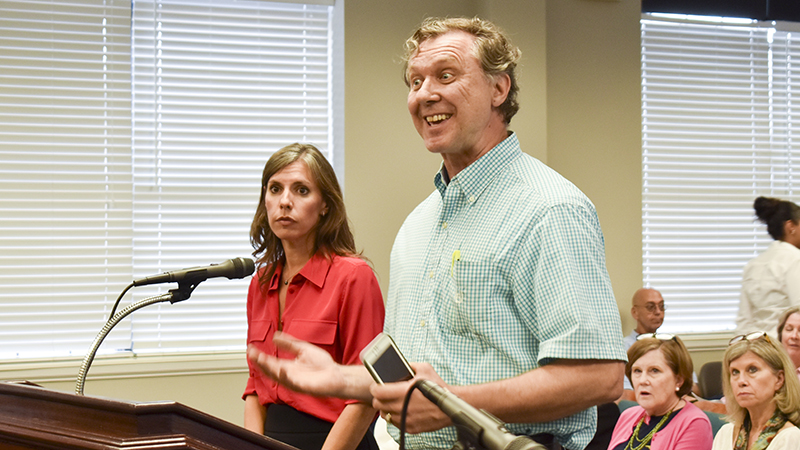 Signs guide us, grab our attention and help us find what we are looking for, but on Tuesday, the LaGrange City Council asked what rules should guide the signs.

The LaGrange City Council held a public hearing for a proposed updated sign ordinance on Tuesday. According to city staff, the ordinance was updated to simplify the ordinance and resolve legal concerns resulting from recent cases on sign ordinances dictating the content of signs. The update has been under discussion at the council level since November 2016.

“One of the reasons that we wanted to amend this ordinance is the number of variance requests that we get under the sign ordinance that end out being fairly rubber stamp type issues,” City Planner Leigh Threadgill said. “We don’t have a problem with what people want to do, but it doesn’t meet the letter of the law.”

Some of those variances were evident in Tuesday’s meeting. The LaGrange City Council approved sign variances for Great Wolf Lodge and the Walmart on New Franklin Road. The variances in both cases were for the number of wall signs. Both would be allowable under the proposed sign ordinance, which considers signage based on the percentage of wall space covered instead of a set number of signs.

“One of the things I’m trying to eliminate [with the updated sign ordinance] is the number of wall signs on a building, so that it is square footage because we have a lot of [variance] requests that have to do with the number of signs,” Threadgill said during a work session Tuesday. “Really, it is not about how many signs as much as what is the overall effect from the percentage of that wall.”

Threadgill said that she has worked with local sign companies to craft the ordinance. However, there may still be a few concerns to consider before the council votes on the updated ordinance on June 26, according to a local business owner who raised concerns during the public hearing.

“If you see something working, why not let it work?” asked Daryl Traylor, the owner of Traylor’s Jewelry & Pawn. “Let us advertise in our way on our own property.”

Traylor argued for a more lenient sign ordinance, pointing to a recent signage issue at his own business. Traylor recently installed a digital sign on the side of his business, but he was later informed that the new sign would require a permit and the type of sign — a changing digital sign — would not be allowed in his zoning area under the current or proposed ordinance.

“He is actually in a C-1 neighborhood [commercial] zoning district, which does not allow for a changing sign [under the current ordinance],” City Manager Meg Kelsey said.

According to Threadgill, there is no variance option for a sign that is not allowed in that zoning area. However, under the current sign ordinance, Traylor would be allowed to have the sign outside his business if his business is rezoned to general commercial, which the city code defines as “those areas of the community where the principal use of land is for general retail service to the region and highway-oriented service establishments which seek locations away from the central business district.”

The sign would have to be part of a freestanding sign under the proposed ordinance, but if the necessary rezoning and permitting is completed prior to the ordinance change, his sign would likely be grandfathered in.

Threadgill said the reason digital signs are limited under the proposed ordinance is to minimize driver distraction.

“What the proposed sign ordinance does do though is not permit changing signage on building signs,” Threadgill said. “It allows them as a freestanding sign only as 50 percent of the freestanding sign. As the technology starts to become more obtainable, less expensive, more folks are probably going to do that, and the distraction to drivers of having changing signs more and more is a public safety concern. That is why the regulations are proposed.”

Traylor said that by providing information like the time and temperature, his sign is doing more good than possible harm.

While certain aspects of the ordinance have been closely reviewed by the council on previous occasions, the need for an update to the current ordinance has remained clear.

“It seems like the problem that we are running into is we are on the precipice of growth, and we can’t go with the same sign ordinances that we had 20 years ago,” Council Member Nathan Gaskin said. “We have to upgrade them to make them uniform, and I understand your situation, but as the city evolves so must everyone else. We have to do this.”

Gaskin said that he hoped that Threadgill and Traylor could work together to find a solution to Traylor’s concerns.