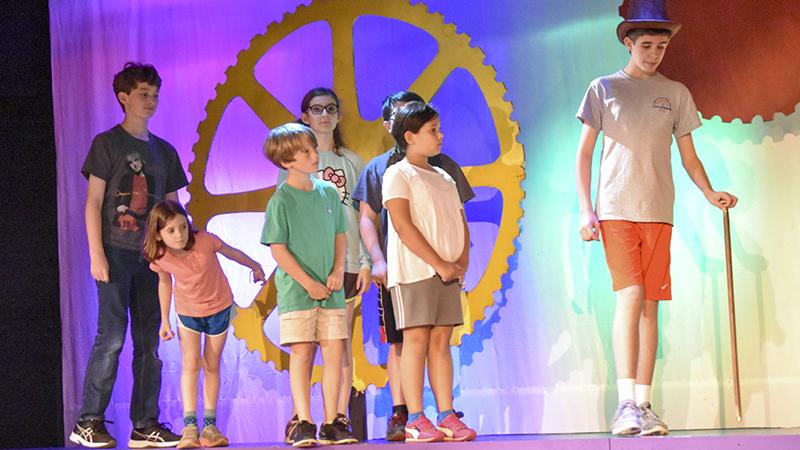 Students at the Lafayette Society for Performing Arts’ Lafayette Theatre Academy rehearse a scene where Wonka shows the children around his factory on Wednesday. The students will perform the play on Friday and Saturday.--Alicia B. Hill

On Friday and Saturday, young performers will take audiences on a tour of literature’s most famous candy factory with Roald Dahl’s Willy Wonka Jr.

The performance will feature rising third through eighth graders who have participated in two weeks of concentrated practice through the Lafayette Theatre Academy.  The LSPA sponsored summer camp has been around for nine years, but this is only the fourth year that the session has been tied to a production.

“I love being able to sing and dance and perform and bond,” Render McCleod, who plays Willie Wonka. “We have all these things that we can do here that we probably wouldn’t be able to do if we lived somewhere else.”

This is McCleod’s third year in the summer program, and many of the students in the program have participated in multiple productions.

“I have known some of the kids who have been coming up for the past couple of years, and so it is really fun to finally see them really stepping into their responsibilities,” said Madison Finney, the director. “It has been a lot of fun, especially with Willy Wonka being different from anything any of us has ever done before. I think the kids are really learning a lot.”

Finney is a junior musical theatre major at Pace University in New York, and she said she enjoys sharing the lessons that she has learned with the young performers. The performers confirmed that it really was a learning experience.

“I’ve learned how to be able to make myself more known, how to show every single personality on stage,” said Max Zachry, who plays Grandpa Joe. “[I’ve learned] how to memorize and how to take responsibility.”

This is Zachry’s second year in the summer program.

“There are a couple of kids that the first year that we did this, were very shy and just didn’t know what to do in general,” said Valerie Longshore-Sargent, the technical director. “Some of them are our leads or big roles in the show, and it is incredible to watch that transformation.”

During the school year, theatre academy participants usually practice for four to six weeks, but with more time to practice during the summer, the production goes from start to finish in only two weeks.

“We do it in a two-week summer camp setting,” Valerie Longshore-Sargent said. “So, they were cast on the first day, and by the end of the second week they are doing a full performance.”

Longshore-Sargent emphasized the role of theater in developing character, confidence and empathy, themes that carried over in recent Tonys speeches, and for the children in the program, it is easy to relate to the characters.

“I love a lot of things about Charlie, but my favorite thing is he is so polite, and he is always happy, except when he doesn’t get the golden ticket,” said Lennon Bailey, who plays Charlie Bucket.

The Lafayette Society for Performing Arts’ LTA will perform at 4 p.m. and 7 p.m. at the Lafayette Theatre Company’s Black Box Theatre on Friday and Saturday. Tickets cost $7.

This will be the last show of LTA’s season, but LSPA is currently taking applications for all fall programs. Early registration is encouraged to guarantee a spot in the desired program. For more information, visit Lsparts.org or call (706) 882-9909.

TCSS to vote on laptops