Masuoka to lead parade about a year after accident 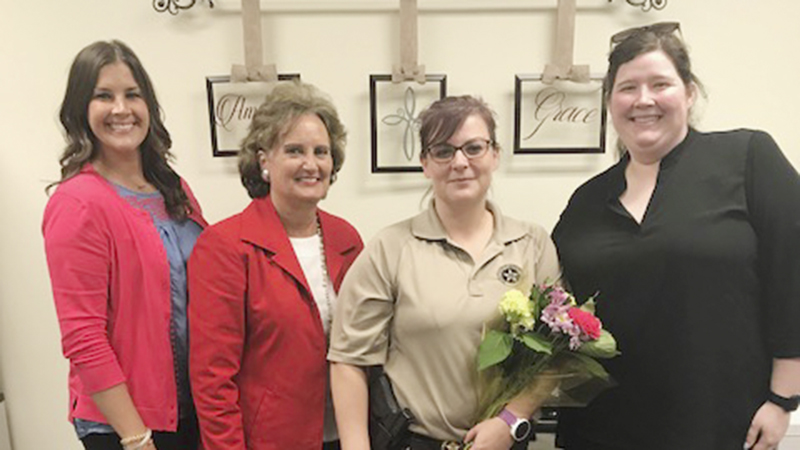 NOTE: This is the first story in a four part series featuring the grand marshals for the 2018 Sweet Land of Liberty parade.

It’s hard to surprise Deputy Stephanie Masuoka of Troup County Sheriff’s Department. In more than 17 years in law enforcement, she’s seen a lot, good and bad, from heart-warming to hair-raising.

But when she was called to the sheriff’s office one day in April to find Junior Service League members delivering flowers and the news that she would be a grand marshal of the 2018 Sweet Land of Liberty Parade, well, Masuoka was more than surprised.

“I was totally shocked,” she said.

The patrol deputy is one of four local public safety veterans chosen to represent their respective departments as “hometown heroes,” reflecting the parade theme, “Home of the Brave.” Now in its 34th year, the patriotic parade for youth will be held at 10 a.m. on July 4 in downtown LaGrange.

Masuoka understands better than most the risks of her chosen career.  She spent last July 4 in a Columbus hospital, unable to walk following a June 22 incident in which a tractor-trailer plowed into the scene of a vehicle crash she was investigating on Interstate 85.

Masuoka was thrown over a guard rail and down an embankment and spent months in rehab, re-learning how to use her broken leg. She returned to desk duty in January and was back on patrol by spring.

And though the deputy modestly declines to describe herself as brave, Troup County Sheriff James Woodruff disagrees.

“She was brave when she pushed the guy whose truck had wrecked out of the way, sacrificing herself to save him,” Woodruff said. “It took courage to endure the long and painful rehabilitation and then even more courage to come back to work. She has gone through so much, and she could easily have decided to do something else, but she was eager to come back to work, serving the people of Troup County.”

Now nearing 40, Masuoka found her calling to law enforcement almost by accident during her college days. She took a criminal justice class while attending Armstrong State in her native Savannah and enjoyed it so much she signed up for more.

“Before I knew it, I had a criminal justice degree,” she said, laughing.

Masuoka worked as a state police dispatcher in Delaware and patrol officer in New York before returning to her native state for a position with Muscogee County Sheriff’s Department. She joined the Troup County department about two years ago and currently works a patrol shift. A typical day includes responding to anything from malfunctioning alarms to felonies in progress.

And, yes, despite almost losing her life, she’s back working wrecks.

“If you let fear control you, it will stop you from doing your job,” she said.

“I am really glad to be back. I worked really hard to get back.”

Returning to work was just one motivation for Masuoka to overcome her injuries.

She is married and the mother of two teenage daughters and stepmother of another. Her son, now a toddler, was just six months old when she was hurt.

“Most of my free time is spent with my kids,” she said.

They juggle schedules and have been greatly blessed, Masuoka said, by the help of her parents, who came from Savannah to help out while their deputy daughter was recuperating. Though some of her coworkers doubted she would return to work, Masuoka said her husband never did.

“He understands the risks of the job and always said ‘When you are ready, I will support you.’”

The recovery process is ongoing.  Masuoka recently resumed Crossfit training but can’t yet return to her longtime passion, long distance running, because the injury “messed up” her gait.

“I am having to modify the exercises,” she said. “I lost a lot of strength, but it could be so much worse. I consider it a blessing to have come back as far as I have.”

Woodruff said his department is proud that Masuoka and other public safety workers are being recognized in the Sweet Land of Liberty parade.

“In a time when law enforcement is often disrespected, we are grateful that our community chooses to honor them,” Woodruff said. “We urge everyone to come out to support Deputy Masuoka and all those participating in this year’s parade.”