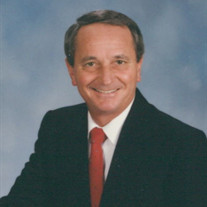 Grover F. Carter, Sr., 78, gained heaven’s crown of joy on Sunday, June 17, 2018, after a courageous battle with cancer. His faith and perseverance were an inspiration and amazement to all.

Grover lived, was educated and worked in LaGrange, Georgia, until 1968 when he moved with his family to Newnan, to continue his long career with Southern Bell as a communications engineer.

He lived a life of integrity and Christian example. Grover was saved and baptized at First Baptist of LaGrange and continued his service for God as a member of First Baptist Church of Newnan since 1968. He served as deacon for many years, served for 30 years in audio visual service, coached the youth softball team for many years, had served as a children’s Sunday school director and had also served as teacher of boys sixth grade boys for 15 years.

Grover was well known in the tennis community throughout Georgia. He was dominant in the state tournaments throughout the 1980’s and early 1990’s. He won hundreds of trophies and being the unassuming person he was, he kept them in the garage instead of on display. He was a member of the ORF tennis club of Newnan for many years and continued to play with these friends for as long as he was able.

Grover was the husband of Sandra McClellan Carter. He enjoyed telling people how he fell in love with her at first sight when she was only 12, and he loved her faithfully ever since. They were married 59 years. Surviving in addition to his wife are two sons, G.F. “Jeff” Carter, Jr. and wife Lisa of Winder and Norman Kenneth Carter and wife Kim of Macon; five grandchildren, Sarah Williams and husband John of Norfolk, Virginia; Joshua Carter of Atlanta; Brianna Nessmith and husband Weston of Statesboro; John Isaac Carter of Athens; and Whitley E. Carter of Macon. He loved and was very proud of his children and grandchildren who brought him great joy.

Grover was a faithful member of his beloved Sunday school class, the Glory Class of First Baptist Church, and they were family to him.

The family would like to express their deep appreciation for the faithful support and love for Grover to his extended family and friends, to the Glory Sunday School Class, to the ORF tennis club, to the Cancer Treatment Centers of America and Dr. Eyel Meiri, Kindred Hospice and to Dr. Cliff Cranford, Dr. Donald Griffin and Dr. Elizabeth Almon.

Funeral services will be conducted Thursday at 3 p.m. at First Baptist Church in the old sanctuary with Dr. Gene Tyre, the Rev. Lee Chitwood and the Rev. L.C. Lane officiating. Burial will follow in Shadowlawn Cemetery in LaGrange.

The family will receive friends Thursday from 2 p.m. until the service hour at the church.

Flowers are welcome; however, memorials may be made to the Sandra M. Carter School of the Arts at First Baptist Church, 15 West Washington Street, Newnan, GA 30263.

To send flowers or a memorial gift to the family of Grover Frank Carter please visit our sympathy store.