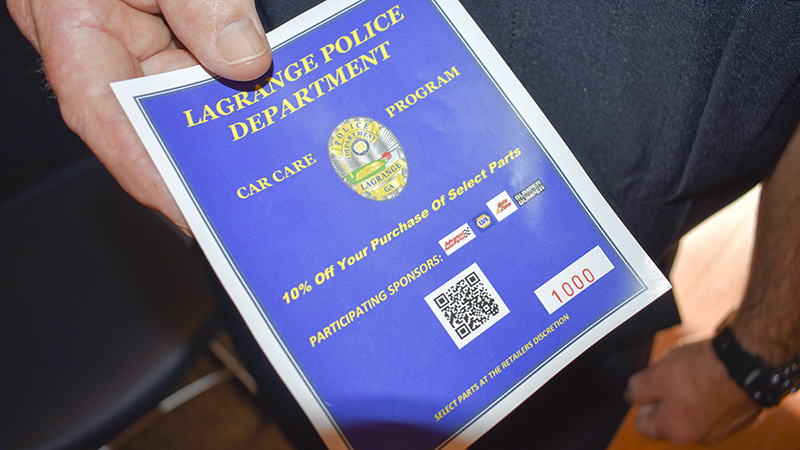 Instead of a ticket, drivers in LaGrange pulled over for a headlight or tail light violation will now be receiving a coupon.

The LaGrange Police Department started its brand-new Car Care Program on Tuesday, which will give drivers a chance to get their vehicles fixed at a discount rather than receiving a ticket.

The coupon will offer 10 percent off at a local auto parts store.

“At least the first time, we always issue a warning, so instead of giving you a warning we’ll give you the coupon, so hopefully that’ll inspire you to get it fixed,” said Officer Jim Davison, who is helping oversee the program. “You are going to get a discount on something that isn’t a real big expense, but to a lot of people $5 or $10 at the end of a day matters.”

“We appreciate the partnerships of all the various auto parts stores involved in this initiative,” Dekmar said in a City of LaGrange press release. “This partnership will help us address motor vehicle defects in a way that provides a service and also takes advantage of this partnership.”

Bruce Crain, the store manager of Advance Auto Parts on New Franklin Road, said he first talked to an officer about the program about a month ago.

“I ran it by my district manager and he said it was fine, so we said we were on board,” Crain said. “We were more than willing to be a part of it.”

“I had two come in with lights they had been pulled over for,” Crain said. “One was a tag light violation, the other was a headlight, so both of the customers came in and bought the part they needed to get their vehicle fixed.”