Shared Spaces: Sculpture looks at what it means to be American 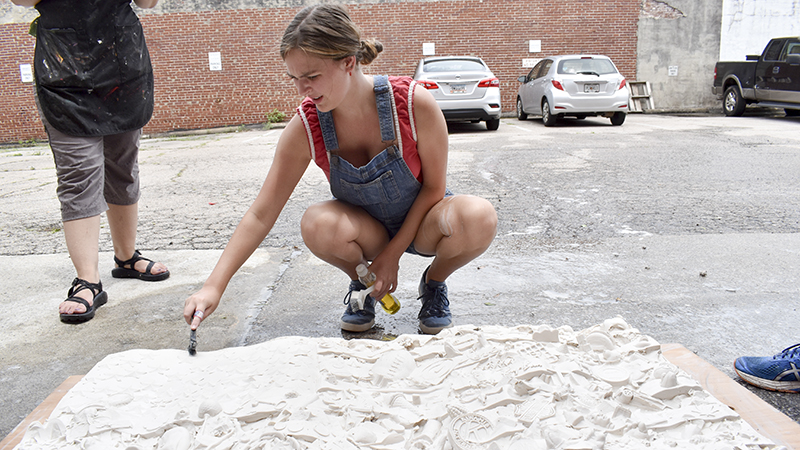 Emma Strickland clears off some of the remaining clay from the plaster and Carrara marble sculpture on Saturday. (Alicia B. Hill | Daily News)

Around 200 people came by the Cochran Gallery on Friday to offer items for a collaborative public art project meant to encapsulate what it means to be an American.

New York sculptor Bob Clyatt led the project, which asked residents to bring items that represent their community to be pressed into clay. Those imprints were used to form an American flag using plaster and Carrara marble that featured symbols of what the neighborhood and country are and other items with special meaning. The Cochran Gallery, LaGrange Art Museum and Downtown LaGrange Development Authority collaborated on the project.

“What is this project? If you want to stand back, this project is about helping figure out what it means to be American today,” Clyatt said. “It is about pluralism. It is about diversity. It about all the different facets of what life is here, and in New York, I wasn’t getting the information. Nobody there could explain to me how other parts of the country are thinking.”

Clyatt said that they stopped counting participants after about 170 people filed through the gallery on Friday, including students from local art classes, downtown merchants and interested residents.

“I just couldn’t have been more excited [about the turnout],” said Laura Jennings, the executive director for the LaGrange Art Museum. “You never know when an artist of this caliber comes to town, what the turnout will be, and LaGrange has just shown its usual hospitality, rolled out the red carpet. People are very intrigued and involved. We saw people from all walks of life yesterday.”

One of Jennings’ stated goals is to get art outside of museum and in the community, where she hopes it will be more approachable. This project appeared to be the perfect fit for that goal, allowing the community to collaborate on an art project in a gallery within view of Lafayette Square.

“What I hope people will get out of this when they see these works is the complexity of all the different things that are meaningful to people, and some things they’ll love, some things they won’t,” Clyatt said. “At the end of the day, I think it is important to remind ourselves how to live alongside of each other when we aren’t always going to agree on things, and let it somehow be a unified whole.”

Gallery co-owner Wes Cochran said that his favorite part of the project was watching the community — especially young people — take part in the project.

“I think this is the first time that we’ve really had a project going where something has really been created in the space, so what is so fantastic with Missy [Cochran] and me is to have all of these young people come and participate in this project and the making of this sculpture,” Cochran said. “To me, that is the most special part of this project.”

Cochran said that he was impressed by the participation and saw many people in the gallery for what was probably the first time as part of the project.

“This is the first stop on this way of working for me, and based on how well it has been going here, I will be doing more,” Clyatt said. “We are in conversations now to do four others — there will be more. Working in LaGrange has been fantastic. The people here have made me feel so welcome and important. It is going to be a tough act to follow.”

Clyatt is in discussion with groups in New Mexico, New York and Indiana to complete a similar project at those locations.