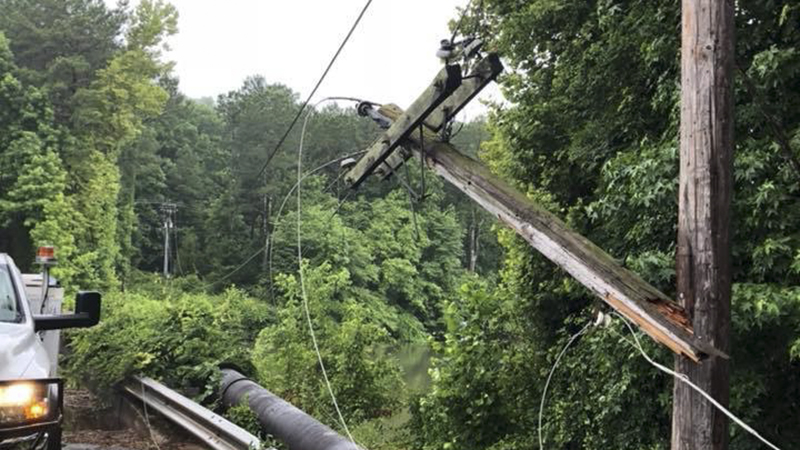 A power line was taken down by a limb during Friday’s storm. (Contributed)

Wind and heavy rainfall resulted in down limbs and power outages in Troup County on Friday night, extending into Saturday in some parts of the county.

Officials from both the City of LaGrange and Troup County reported a relatively small amount of damage overall, and both sent crews to immediately address the damage.

“The storm moved through our area at 6:20 p.m. Friday evening,” LaGrange Utilities Director Patrick Bowie said in an email. “The city was very fortunate that given the strong winds only a small portion of our 13,000 customers lost power. The biggest outage involved a tree that fell just past the Country Club bridge breaking a pole and sending wires into the lake.”

According to a Facebook post by the City of LaGrange, crew members were able to use a kayak to get a wire across the lake by Highland Country Club. Power was restored from that outage around 11:30 p.m.

“Service was restored in about five hours,” Bowie said. “All available employees responded to deal with the scattered power outages.”

According to County Engineer James Emery, Troup County’s roads saw many small limbs and leaves in roadways due to the storm, but the only county roads that were blocked by trees were Ralls Road and Taylor Road. He said that the Troup County Roads Department was able to respond immediately to reports and roads were quickly cleared.

“They never hesitate to respond at any hour, nor under any adverse condition,” Emery said in an email.

Roanoke Road, which is under the Georgia Department of Transportation, was closed from Friday evening until late in the day Saturday due to down wires that caught on a passing train resulting in damage to the wires, power poles and train gates. The GDOT could not be reached for comment on Sunday.

According to Hogansville Mayor Bill Stankiewicz, all power outages resulting from the storm in Hogansville were resolved.

Hogg of Troup County Fire to help lead the…