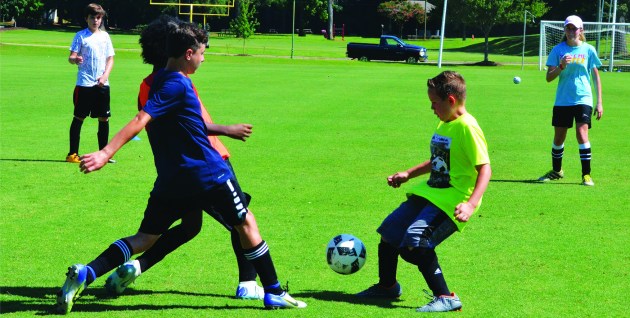 It’s been a part of his summer-time routine for nearly three decades.

Jeff Geeter was in the early stages of his time as a soccer coach at LaGrange College when he decided to offer a youth camp.

This week, Geeter’s camp is back for the 28th year, with dozens of boys and girls learning the sport fromcoach Colin Ross, and numerous others.

“I basically give them the outline, what topic we’ll be dealing with that day, and they’ve got the flexibility if they need to change anything or shift anything around, to do it,” Geeter sa id. “And they do great. I’m really fortunately to have such good folks working.”

Geeter came to LaGrange College in 1990 to take over the men’s soccer program, and he has been affiliated with the school ever since. Geeter’s final season as a soccer coach was in 2013, and since then he has been LaGrange College’s strength and conditioning coordinator.

While Geeter no longer coaches soccer, he felt strong about continuing the camp, so for five days each June he and his fellow instructors are on the field teaching boys and girls from the ages 5 to 14.

“It’s been great,” Geeter said. “Over the years, I’ve had a lot of kids play for me that have come up through the camp. You have that, and you have the ones that come back and help with the camp, or go into coaching. It’s really fun.”

Before coming to LaGrange, Geeter coached the men’s and women’s teams for four years at his alma mater, Tennessee Wesleyan.

During his time in LaGrange, Geeter has been gratified to see soccer mushroom in popularity.

“Everybody involved has done such a good job,” Geeter said. “When I first got here, I think there may have been 100 and something kids playing (recreation soccer). Between the two seasons, they probably have four or 500. And the Titans have established themselves, and given kids to play at a higher competitive level. At various times, all of the high schools have done well.”