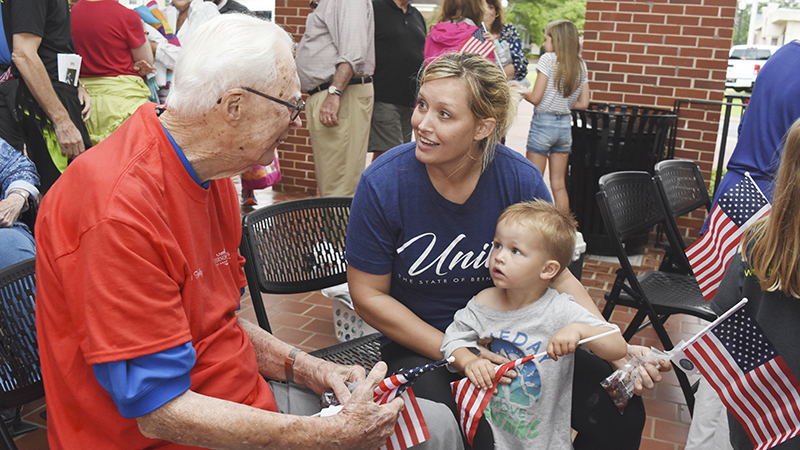 A young child talks to a military veteran during last year’s Red, White and Blue event at Sweetland Amphitheatre. --Contributed

Organizers of Friday’s Red, White and Blue Fourth of July celebration at Sweetland Amphitheatre are hoping for good weather, and if the forecast is correct, it looks like they’re going to get it.

Last year’s event was plagued by heavy storms, which led to the cancellation of a planned movie and a music concert. The weather shouldn’t be a problem this year, and Barbie Watts, director of the Downtown Development Authority, is hoping for a big crowd.

The event will start with a veteran meet-and-greet that will take place at Boyd Pavilion from 7 p.m. to 7:45 p.m.

“We think it’s a great time for the community to come out and meet them and thank them,” said Barbie Watts with the Downtown Development Authority. “It was very heartwarming last year to see people bring their children and grandchildren to meet these heroes of ours.”

Watts said the band was specifically created for this event.

“They come together and rehearse a patriotic program for us, and it always blows me away how wonderful their music is,” Watts said. “It’s a total volunteer effort.”

Once the sun sets, the movie “Wonder Woman” will be shown on the outdoor screen in front of the Sweetland stage.

The event is picnic-approved, meaning outside food and beverage can be brought in. Local vendors will also be on hand selling food.