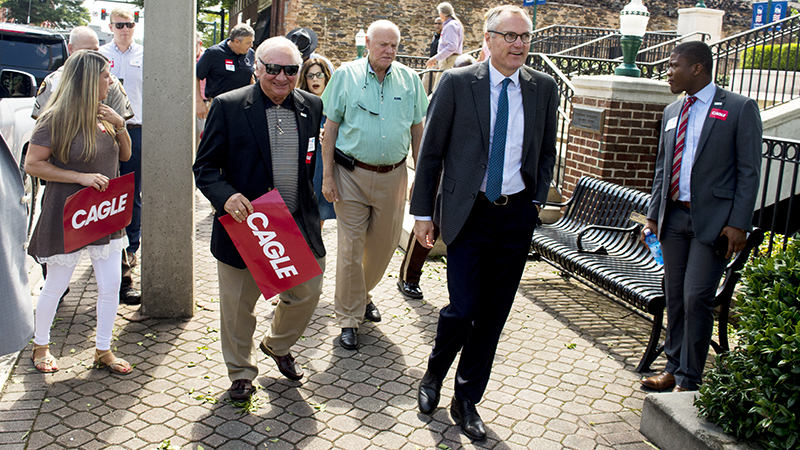 Lt. Gov Casey Cagle said Wednesday he will protect the state’s water supply at all costs, just one day after the U.S. Supreme Court directed a special master to revisit key aspects of Florida’s water rights case against Georgia.

With the run-off election for governor less than a month away, Cagle made his third stop in LaGrange in the last five months.

He didn’t make a speech, but he did talk to The LaGrange Daily News for a brief interview.

Cagle was asked specifically about the Florida-Georgia water rights case, which continued Wednesday after the U.S. Supreme Court voted 5-4 for an expert to revisit key aspects of the case.

“We felt like we had a very strong case, but now it has gone back to a special master. Florida was not able to able to make a compelling argument that Georgia has been hurtful to them in terms of water supply, but on the same token, we probably weren’t as effective in making our case that we had not been,” Cagle said.

Florida argues that the water usage in Atlanta and southwest Georgia farms led to the collapse of the oyster industry in Apalachicola Bay. Florida Gov. Rick Scott said Wednesday that the court’s ruling was a “huge win” for Florida.

“It was certainly not a loss, but I am going to be a governor who is going to protect our water supply at every cost,” Cagle said. “That’s the bottom line. We have a statewide water management plan, and we are being good stewards of that resource and will continue to be, but Alabama and Florida need to understand we will take it to every level we can in order to make sure Georgia’s economic prosperity continues to be strong.”

According to an Atlanta Journal Constitution article, Georgia has spent $47 million of taxpayer money on litigation over the Apalachicola-Chattahoochee-Flint river basin since 2011.

“We would like to have a water compact with Alabama and Florida. We’ve worked on that repeatedly, but they are in a position where I think they want someone in a black robe to make that decision for them because it’s political in nature,” Cagle said. “In the end, we are going to continue what we need to do.”

Cagle will face current Secretary of State Brian Kemp in the Republican run-off on July 24, with the winner set to take on Democrat Stacey Abrams in November.