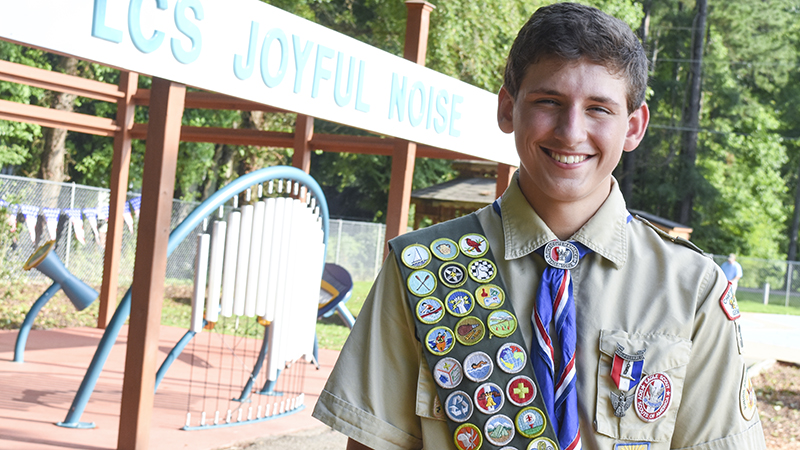 There are an average of 50,000 Eagle Scout projects completed each year all over the country, but only one can receive the distinguished Glenn A. and Melinda W. Adams National Eagle Scout Service Project of the Year Award.

This year’s honor went to LaGrange native Nathan Fain, a 16-year-old homeschool student who plays sports at Lafayette Christian School. Fain’s project was to create a musical playground at LCS, which is fully handicapped accessible. The playground was named Joyful Noise, which refers to Psalm 98:4.

The idea came from a meeting with LCS headmaster John Cipolla, who had a vision for a handicapped accessible playground area but knew the school couldn’t afford it.

Fain made it happen, raising a total of $40,000, with $22,000 of that being cash donations and another $18,000 in material and equipment costs. Fain said 1,200 hours were spent on the project in all. Completing it allowed him to become an Eagle Scout, the highest rank in Boy Scouts. Only around 4 percent of Boy Scouts go on to become Eagle Scouts.

“When I got my project approved and my fundraising application approved, I went door to door to businesses, and they would either donate materials or they’d say I have a concrete career, I’ll do the concrete,” Fain said. “I received everything from a personal donation of $5 to my largest donation of $5,000.”

Fain said he wanted to do a challenging project, so that he could learn something, while also benefitting the community long-term.

“When I was getting it approved, they told me they would prefer me to never put my hands on the project and lead someone to do it, [rather than] do it all by yourself, which is one of the reasons I chose such a large-scale project,” Fain said. “I worked on a farm my entire life, so putting up something small or building a shed for somebody wouldn’t fully challenge me. I tried to do something that I didn’t know how to do.”

“It was really exciting, and I was very happy with the outcome of the project and how the children love playing on it. I play sports here, so I get to hear them playing on it every day,” Fain said.

The idea of submitting for the national award was never a thought in Fain’s mind. Joe Westbrook, Yellow Jacket District Executive for the Boy Scouts of America Chattahoochee Council, called Fain to tell him he should submit the project.

“We never even knew the award was there, but once we found out about it we thought, why not apply?” said Deanne Fain, Nathan’s mother.

Fain, who joined Boy Scouts when he was 6-years-old, is a member of Troup 326 in LaGrange. His parents are Deanne and Jay Fain. He currently runs a lawn care business, called Jeremy’s Lawn Care business, which was started by his older brother. Fain received a $2,500 scholarship for winning the Eagle Scout honor, which he hopes he can use to go to Georgia Tech to attend college.