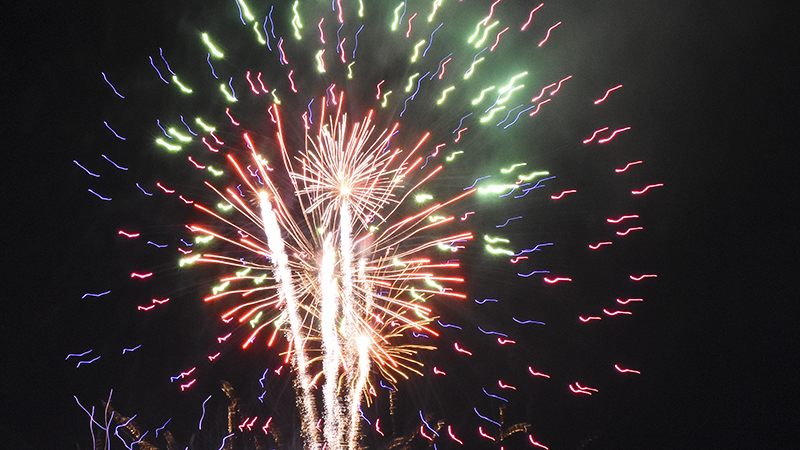 The LaGrange Fire Department has advice for anyone who plans to shoot off their own fireworks this weekend — don’t do it.

Lt. Rob Vael, public information officer for the LFD, said the LaGrange Fire Department follows the National Fire Protection Agency’s guidelines on fireworks, which is that they are dangerous for consumers to use.

“Go somewhere where fireworks are being put off professionally, where someone has arranged and hired professionals to put on a fireworks display,” Vael said. “We don’t encourage people to go out and use fireworks just because they do start fires, they cause injuries.”

Vael said sparklers, one of the most popular and simple fireworks, reach 1,200 degrees Fahrenheit.

“Glass melts at 900 and wood burns at 575 degrees, so 1,200 degrees will cause third degree burns pretty quickly,” Vael said. “And sparklers account for one-quarter of emergency room firework injuries.”

According to the NFPA, fireworks start an average of 18,500 fires per year, including 1,300 structure fires, 300 vehicle fires and 16,900 outside and other fires. The fires cause an average of three deaths, 40 civilian injuries and an average of $43 million in direct property damage.

You must be 18 or older to purchase fireworks. The law does now require a person to be of a specific age to ignite a firework, but children younger than 15 accounted for 26 percent of the injuries suffered in 2015, and generally account for the majority of firework injuries each year.

“Adult supervision is a requirement. You need common sense and responsibility,” Vael said. “And know that you are dealing with items that could potentially be explosive, extremely hot and can cause fires extremely quickly. A great deal of caution has to be observed when handling or using fireworks.”

Fireworks can legally be used until midnight on the Fourth of July. It is illegal to light fireworks within 100 yards of a hospital, nursing home, prison, nuclear power plant, gas station or refinery. Fireworks are also prohibited in state parks and public parks unless you have a special license.

Insurance and Safety Fire Commissioner Ralph Hudgens also offered firework tips in a press release this week. He recommended anyone using fireworks to do so outdoors in a clear area, away from buildings and vehicles. He also recommended everyone read the labels carefully and only light one firework at a time.  Hudgens also said to keep a garden hose or bucket nearby and to never let a child ignite a firework.

Troup County Parks and Recreation will hold an event on the Fourth of July at Pyne Road Park.  Gates open at 10 a.m. and fireworks will begin after dark.