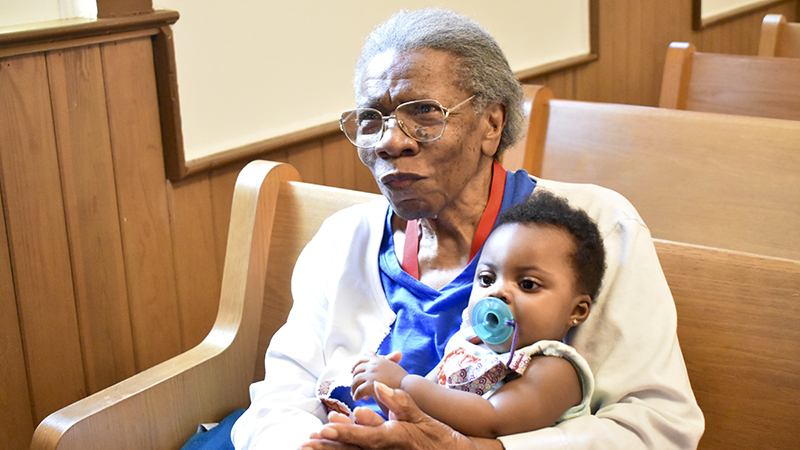 On a quiet road in Troup County, sits a piece of local history and culture in the form of Mt. Zion Baptist Church, which is celebrating its 150th anniversary this year.

The church was established in 1868 by a group of local families, but the structure — which now houses the congregation each Sunday — was built after the turn of the century.

“I understand that it started under Bush Arbor, and it was just basically a canopy with vegetative material on top of it,” said Dr. Van Shrieves Sr., the pastor at Mt. Zion Baptist Church. “Many churches did it that way when they did not have a wood or brick and mortar type church.”

According to Shrieves, the people who founded the church would have been born in slavery, and he said that he feels like they built it for the generations to come. That’s a legacy that he hopes to honor as pastor.

Some of the church’s current members can still recall stories from their grandparents and older relatives about the church’s early days.

“My grandparents were raised in this church, and Bush Arbor, I was told it was started down by the creek,” said Ethel Stargill, a church member. “They didn’t have a church. They just had to take some limbs and bushes and make something like a tent at the creek, by the water, and we would baptize in the creek.”

The tree branches worked like a tent, but eventually the congregation needed a more permanent home. The congregation received a donation of land for the church, and built it where it still stands today.

“The neighbors built the church, and we’ve been here ever since,” Stargill said. “We just add on add on to the building.”

According to Cora Stinson, First Baptist Church on the Square allowed Mt. Zion’s congregation to meet in its basement while the church was under construction. The church continued to host baptisms in the creek until recent years.

“I watched them baptize people down in the creek,” said Cora Stinson, the oldest member of the church. “We didn’t have a pool.”

In that 150 years of history, what sticks out the most for church members is the sense of family and community within the church. That family feeling shows in the form of home-cooked dinners, handmade quilts and help with children over the years.

“This church was like a pillar. If you went to the hospital, and you were sick, you could always come here and find some kind of salvation,” said Addie Porter, a church member. “It was love that you felt. There wasn’t much money, but there was a whole lot of love. You could hear them singing when you came past Sister Cora’s house. … This was a place called love.”

That is one thing that church members say has not changed over the years.

“I think that is one of the Hallmarks of Mt. Zion is that we sure love,” Shrieves said. “We don’t put it on. We love you, and you’re welcome here eight days a week.”

That welcoming spirit extends to members old and new alike.

“It is a family here,” said Nicole Spafford, a newer church member. “Not only us, but anyone who comes, they leave saying they feel welcomed. They enjoy themselves, and they feel like they are at home, even if this isn’t their home church.”

At the same time, the church prides itself as a place that those raised in the church can still return to year later.

“There are a lot of young ones that still take this church as their home church,” Stargill said. “This is their home church. They come from Virginia, up to New York, from all around, and they come to this church. The pastors that came to be ministers here come back, and we invite them back, but they have churches and built a big family.”

Commissioner Ellis Cadenhead and LaGrange Mayor Jim Thornton attended the church’s 150-year celebration in June, where the church was honored with a proclamation.

The church is currently in the process of applying to be added to the historic registry. On Sunday, Aug. 5, Mt. Zion Baptist Church will host its homecoming service.