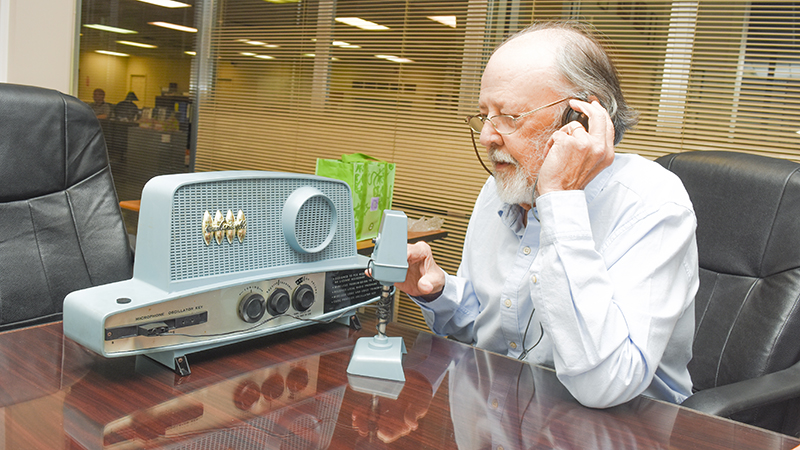 The Georgia Radio Hall of Fame has moved to LaGrange, where it hopes to eventually set up a full-time museum.

The hall, a nonprofit, was started in 2007 and has operated a museum in St. Mary’s, a southeast Georgia city just above the Florida state line. However, last year the museum had to move out of the building it used in St. Mary’s, and CEO John Long and his wife Patti embarked on a journey to find a new, permanent home.

“We met with probably a dozen municipalities to discuss the possibility of moving the Georgia Radio Hall of Fame there. Patti and I were prepared to move and bring everything with us, set it up and run it,” Long said. “The caveat was, we didn’t want to be in the museum business. We wanted to find a city that wanted a tourist attraction, as well as an education attraction, as well as a historic preservation attraction, and we could give them that at no charge.”

There were a lot of cities interested, and there were several reports across the state of the radio hall of fame finding a new home. However, in the end, Long said none of them worked out.

“We got responses from tourism directors, from mayors, from city council people, but when it got down to the actual vote by the city council or county people, the governments of those municipalities, it didn’t happen,” Long said.

Last year, the Longs kept driving through LaGrange on trips and decided to stop and really look around. What they found was a city that Long, a LaGrange High graduate, remembered, mixed in with one that had changed in many ways.

Long actually got his start in radio in LaGrange at WTRP.

“I was the first one to lay a Beatles record here,” Long said.

The hall started in 2007 as what Long calls an “internet-based nonprofit” as a way to honor longtime personalities. Long founded it with the late Sam Hale. At the time, no radio hall of fame existed and they felt a lot of history was being lost.

“We just thought it would be a nice organization to recognize Georgia radio professions, past and present, with no real ideas about how it would be accepted and how successful it would be,” said CEO John Long. “It just took off and took on a life of its own to the point where now next March will be our twelfth year.”

Long said the organization has nearly 1,000 members worldwide. It’s $25 for a lifetime membership purchased by mail and $30 if using Paypal. Long said more than 100 people have already been inducted into the hall of fame. Many more will be inducted this year on Oct. 22, when the hall of fame holds its annual induction ceremony in LaGrange for the first time.

The event will be held at Callaway Conference Center.

Past ceremonies have been held in Atlanta.

Four men have been inducted in the hall of fame from LaGrange —Ed Mullinax and the Hurst brothers, Byron, Frank and Julian.

Long said the hall will set up a temporary exhibit in the Legacy Museum in November, with hopes of eventually finding a full-time spot in LaGrange for the museum. He said he had three storage units full of memorabilia — including more than 300 old radios —in St. Mary’s. All of it has now been moved to LaGrange.

Long said all of the locals he’s talked to have been welcoming and happy to help.

“We’ve got a museum in a box and what we want to do is give it to the city of LaGrange,” Long said. “We don’t want any money. We’ve done all we can to collect it and archive it. If something happened to me, I don’t know what would happen to it.”

Long said the museum attracted thousands of visitors a year in St. Mary’s, set up in a small room that was open 24 hours a day, seven days a week. The entire hall of fame is run by volunteers and Long, who said much of the time it’s a “one-man operation.”

“We operate on a very thin margin budget. There are no salaries,” Long said. “I don’t get one single penny. I am reimbursed for some expenses for using my home as the office, but other than that there are no paid employees. It’s all volunteers.”

Long said he’s hoping a more permanent plan will be in place for the museum soon.

“The worst thing that can happen is we get to the end of the exhibit, have no place to go and have an auction and sell off all the stuff, which I think would be horrible,” he said.

“Radio is important. It still reaches 93 percent of Americans every day.”

For more information on the Georgia Radio Hall of Fame, including past inductees and a list of nominees for this year, visit www.grhof.com/.