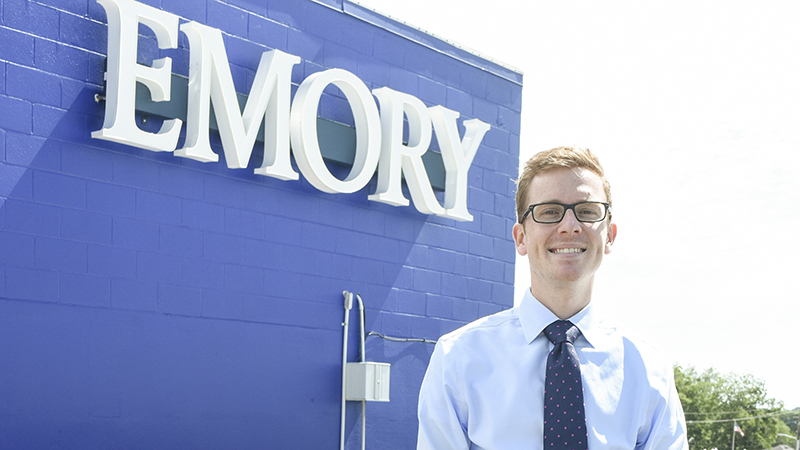 Brent Addison grew up in LaGrange and always knew he wanted to come back and serve the community in some capacity.

Now, at 30, he’s the acting director of operations at Emory at LaGrange, a role he was promoted to in the last few months. Addison has worked with Emory for the last five years, primarily working in finance and operations, but when former director Eric Blackman left he was tasked with taking over as director.

He now oversees the Emory Clark-Holder Clinic, Emory Southern Orthopedics, Emory at West Point and Emory at Davis Road, which have around 200 employees altogether.  For Addison, it means a lot to give back to a community where he has so many memories.

Not that long ago, he was the shortstop on LaGrange High School’s state championship baseball team.

“I think the best part for me being local is having the opportunity to serve your community, a community that has given so much to you and the chance to serve its people and to give back has been great,” Addison said. “That’s what I’ve loved about this place, but just staying within the community itself and knowing you have an opportunity to raise your children in the same way that you were raised.”

Addison said he always had friends who were older than him, so being the director of Emory at LaGrange at 30 isn’t something he’s thought a lot about.

“You always hear the question, what are you going to do when you grow up?” Addison said. “Are you ever really able to answer that question? For me, personally, it’s just trusting in the Lord that he’s gone before me and laid out the paths and that I’m just walking in his will and being a good steward of what he’s given me and trusting that everything else will work out in due time.”

Addison and his wife of five years Mary Frances Addison have one child, 2-year-old Mary Owens Addison, and have a second baby due in December.

In his free time, he enjoys playing church league softball and baseball. He also likes to water ski, but many of his hobbies have changed since becoming a dad.

Addison also serves on the HYPE board at the LaGrange-Troup County Chamber of Commerce and is a worship leader at First Baptist Church on the Square.