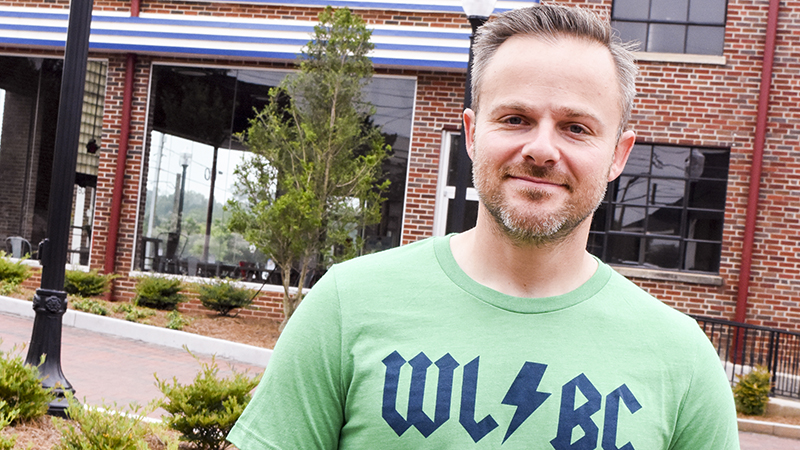 Locally most people know him as one half of the team that envisioned and founded Wild Leap Brew Co., but music agent turned brewery owner Rob Goldstein has far more to his story.

Goldstein moved to LaGrange to found Wild Leap Brew Co. with Anthony Rodriguez roughly a year ago, but the decision to open a brewery in a small Georgia city has been years in the making, with the experience gained through other experiences now benefiting the community.

“I originally moved to Atlanta when I was 12,” Goldstein said. “My dad had gotten transferred as part of his job, but the first time around, I didn’t really like Atlanta. In fact, when I graduated high school, I looked for the farthest place from Atlanta that I could go where I could get into college, which was Arizona State.”

While in college, Goldstein wrote for MTV, E!, Yahoo and other groups as a stringer. After graduation, Goldstein moved to Los Angeles where he worked in the music industry.

“I started in the mail room at the William Morris Agency and worked my way up,” Goldstein said. “Eventually, I became a junior music agent and ultimately came to the realization that I didn’t want to be an agent for the rest of my life, so I formed a company with a friend of mine.”

That company was a music branding firm where Goldstein worked for four years, before selling the company and returning to Atlanta. Once there, Goldstein worked as the director of marketing and events for the southeast region of a major hospitality company. At that time, he also began producing large events on the side, which is how he met Rodriguez, his partner at Wild Leap Brew Co.

“I always make the joke that if you told me 10 years ago, when I was living and working in Beverly Hills that I would be located in LaGrange and actually incredibly happy about it, I would have thought that you were nuts,” Goldstein said. “As soon as we made the conscious decision to start the brewery in LaGrange, we knew that the only way to do it was to go all in and move here, move our families, and we are super happy with that decision.”

Goldstein now applies his knowledge of the music industry to scheduling bands at Wild Leap Brew Co., and he said that music is still a big part of his life. He will marry fiancée Brittany Knecht on June 29. Knecht also loves music and is over sales for the brewery. Goldstein said that the brewery team is looking forward to announcing more events and partnerships in the future.

“We like to create an environment where all ages and all demographics are welcome,” Goldstein said. “That is one thing that makes us the happiest is to be a meeting place for the community, and on any given day you’ll see a young couple with a beer in one hand and a stroller in the other, and you’ll see kids, and you’ll see grandparents all having a great time. That is what we want at Wild Leap. This is a place for the whole community.”

Goldstein is a member of the Strategic Planning Board, The Friends of The Thread and the LaGrange-Troup County Chamber of Commerce.

Twenty Under Forty: Brown gives back in numerous ways…