Twenty Under Forty: Car wreck inspired Daniel to get involved in community organizations, make the most out of life 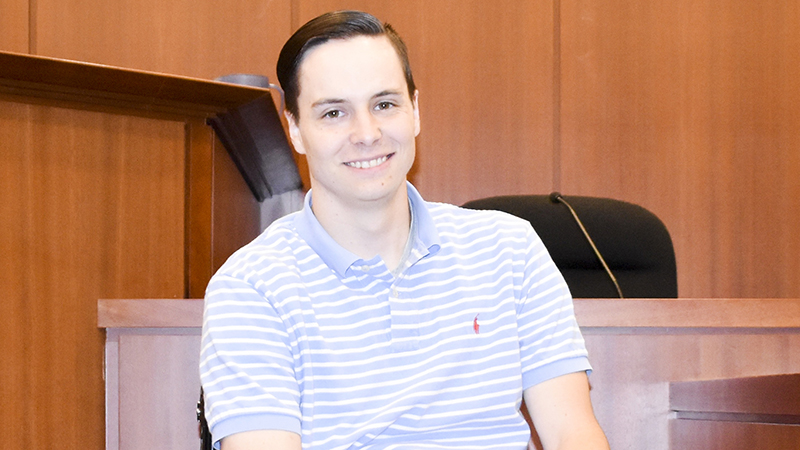 Hill Daniel, 26, works for the Troup County Felony Adult Drug Court, where he helps people put their lives back together every day, but that is only the tip of the iceberg when it comes to what he is doing in Troup County.

Daniel grew up in Forsyth, where he played soccer in high school. He also achieved Eagle Scout status, but he said that a car wreck during his senior year of high school has actually inspired him to do more with his life.

Some would consider being in a wheelchair a setback, but anyone would be hard pressed to find someone more involved in the community and local organizations than Daniel. That involvement started in college following his accident and continues today.

“I’ve joined a fraternity, done national events, joined a hockey team. I joined a fencing team,” Daniel said. “I’ve traveled abroad, got married, graduated and I was the president of the student body while I was at the college. I was the vice president of my fraternity. I have a job, had school, had classes. I have just done so much. It didn’t matter if I was in a wheelchair or not in a wheelchair. If I had not wanted to open myself up to new experiences then none of those benefits would have been open to me.”

Daniel graduated from LaGrange College in 2013, and he began working for the felony adult drug court where he had been interning. He highlighted the difference that the court can make in the lives of those it serves.

“Up here through work too, this is the felony drug court, so we take people with repeat felony drug offences, and instead of sticking them in jail, we rehabilitate them,” Daniel said. “We prepare them for community involvement when they get out of here.”

In addition to his work, Daniel is also a member of the local Mason’s Lodge, the Optimist Club of LaGrange,  coaches in a local youth hockey league and volunteers his time at the Alpha Delta Gama Fraternity. He said that he really loves helping out with the youth league his friend Glenn Cunningham founded.

Daniel lives in LaGrange with his wife. His sister also lives in town.

Story and photos by Alicia B. Hill

Twenty Under Forty: Smith, PIO at TCSO, works in…