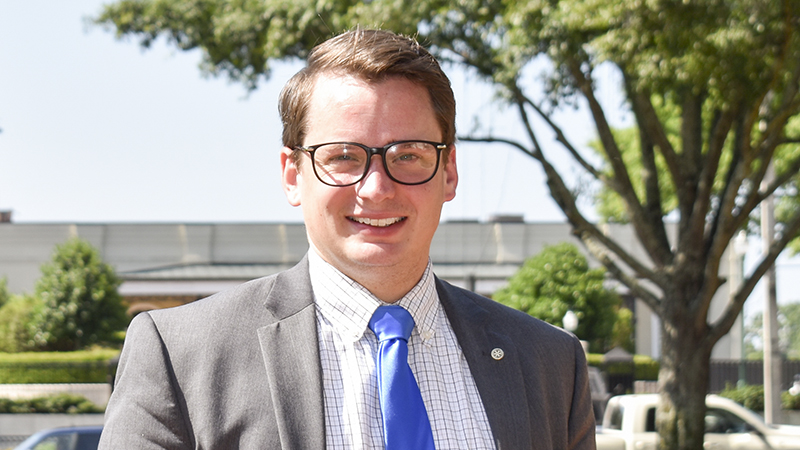 The dapper, bespectacled Edward Jones financial advisor can often be seen maneuvering his way through downtown in his blue convertible, often driving to or from a meeting related to one of the plethora of boards and service organizations he helps lead. His meetings, both professional and personal, rarely go north of 10 minutes without interruption from a friend or acquaintance. Always, those interruptions are met with a genuine smile and kind word from one of LaGrange’s young business upstarts.

Hall, a LaGrange native and LaGrange College graduate, will turn 30 on the last day of July. He and his wife, Leora, have two daughters under the age of three, Charlotte, 2, and Gemma, 4 months.

In addition to his robust home and professional life, he has made a point to become extremely civically engaged. He is the membership chair for the LaGrange Rotary Club, is on the board of directors for the First Choice Women’s Shelter, United Way of West Georgia and the LaFayette Alliance. He also volunteers for the Troup County Homeless Coalition’s warming shelter and is a member of HYPE.

“I have skin in the game,” Hall said simply, when asked why he feels compelled to be as involved as he is. “This is my community. I’m raising kids in this community. It is vitally important for us to have a strong, engaged, local community.”

Prior to his decision to join Edward Jones, Hall took a job with Kia Motors Manufacturing after graduating from LaGrange College in 2010. He was quickly promoted from his entry-level position to team leader, then to group leader, where he oversaw a team of approximately 30.

While Hall enjoyed the work at Kia, he developed an itch for continued business development. He applied and was accepted into the Executive MBA program at Indiana University. Thanks to a strong academic showing in the MBA program, Hall was able to enroll in a dual-master’s program and in doing so he discovered a deep interest in finance. This led him to change career paths in November of 2016.

“Kia was an excellent place to work, I enjoyed what I did, but I realized finance was my calling,” Hall said. “That’s when I took the jump and changed careers. I realized this was something I could get excited about every single day.”

After taking the career change leap, Hall doubled down on his civic involvement. Looking forward to the continued improvement of LaGrange and Troup County, Hall places vital importance on more young professionals becoming involved in local service organizations and on following the Golden Rule.

“It is vital to the success of our community to be engaged and to work together as one community,” Hall said. “We are called to love our neighbors as ourselves, and I think one of the most effective ways to do that is through the service organizations in your local community.”

Twenty Under Forty: Headrick serves as director at Hillside…