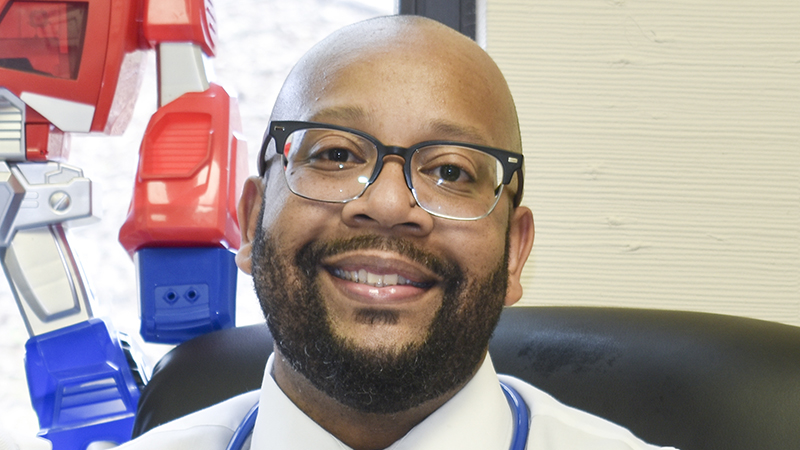 Dr. Torey Harden knows how to relate to his patients.

In the corner of his office sits a large Optimus Prime figurine, something he’s very proud of. The fictional character from the Transformers franchise serves as a reminder of what Harden loves most about his job — the children he gets to help.

“In going through all my rotations in med school, [pediatrics] was the only place where I felt happy,” Harden said. “I guess it’s because I’m a big kid. I never really grew up myself.”

Harden, 34, has worked at WellStar West Georgia Pediatrics since 2014, when he and his wife, Taijha, moved to LaGrange to be closer to family in Atlanta.

Previously, he had attended Morehouse College and earned a bachelor’s of science degree in biology. He completed his residency at the University of Miami.

Harden met Taijha through friends in 2011. The couple had twins in February — Tori and Taiylor. He said now he has an even better understanding of what parents are going through when they bring a child to his office to be seen.

“It makes you a better pediatrician, and I would say a better man, just in general,” Harden said.

“It reinforces all the things we tell parents and the suggestions we make, and then some. It gives you a lot of understanding of why parents say some of the things you say don’t always work.”

He said being a father of twins has changed his life in a big way.

He said in only five months he and his wife can tell a difference in the personality of his two girls.

“It’s double the challenge. Every time you get one settled or you do something with one you have to do it all over again with the other one,” Harden said.

Harden is a member of the of Phi Beta Sigma and the American Academy of Pediatrics.

He enjoys  coaching T-ball and might even coach basketball this upcoming season.

“I thoroughly enjoy being a part of the community. I don’t just work here. I also live here, play here. My kids are growing up here along with everyone else’s. I like the small town feel where you know the people you work with every day,” Harden said.

“It makes you feel a part of the community and you feel like you can make a difference.”

Twenty Under Forty: Loveland right at home in job…