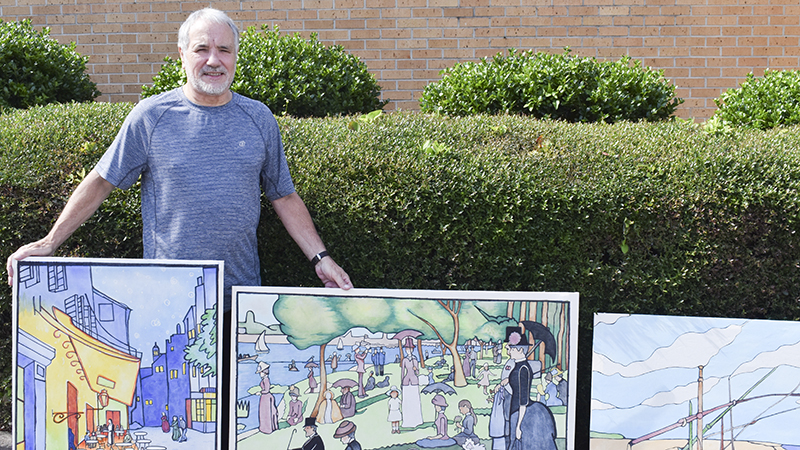 Ron Hunt poses with some of his batik paintings. Many of his paintings are based off the works of famous artists. (Alicia B. Hill | Daily News)

Sometimes the medium makes a big difference in a piece of art. Perhaps that is part of what makes Ron Hunt’s batik paintings so interesting.

Hunt frequently paints using batik to interpret classic oil paintings ranging from interpretations of the works of Georges-Pierre Seurat to Vincent Van Gogh. He began working in batik while teaching students at Heard County High School where he taught for 15 years.

“While I was there, I tried to introduce techniques and media to the kids, and one of the things that I saw there was batik,” Hunt said. “All that you really need to do it is some way of coloring it like acrylic paint, glue and fabric. So, that is what I did. I took classic paintings, and I interpreted them in batik.”

The simplicity and potential of the style was a selling point for Hunt.

“[I like] the simplicity of it, the ways you can use colors, working with fabric the way you have to with batik,” Hunt said. “I don’t do it the way that it was traditionally done, where wax is used. The wax resists the color. I use glue.”

Because he originally learned about the style side by side with his high school students. He got to learn from their experiences as well.

“I even learned from the kids because they’ll do stuff, and they’ll make a mistake,” Hunt said. “Then they’ll say, ‘how can I fix this?’ I say, ‘I don’t know, let’s figure it out together.’ That would happen, and some of these kids were good. They were really surprisingly good.”

In addition to batik, Hunt also enjoys painting slice of life paintings, or as is often the case, slices of automobiles.

“I do realistic style, but with my painting, I am doing automobiles right now — some classic and some older,” Hunt said.

He also enjoys being part of LaGrange’s art community, including the Visual Arts Alliance of LaGrange.

“There are some really talented people around here who are like me — who are not really outgoing,” Hunt said. “I was really surprised at the amount of talented artists that are in this area.”

Meanwhile, his wife, Cathy Hunt, who he calls his muse, just enjoys watching him work.

“He really has been prolific in retirement,” Cathy said. “I think it is great. He is not a retiree that couldn’t figure out what to do with himself. He paints every day, and I’m glad he has that.”

Hunt’s work will be featured at the second annual Summer VAAL Exhibit on July 21 at 6 p.m. at The Suffering Artist in Hogansville. He said that it will be the first time his work has been displayed in a gallery. His work can also be viewed on Facebook in “Ron’s Art Group.”