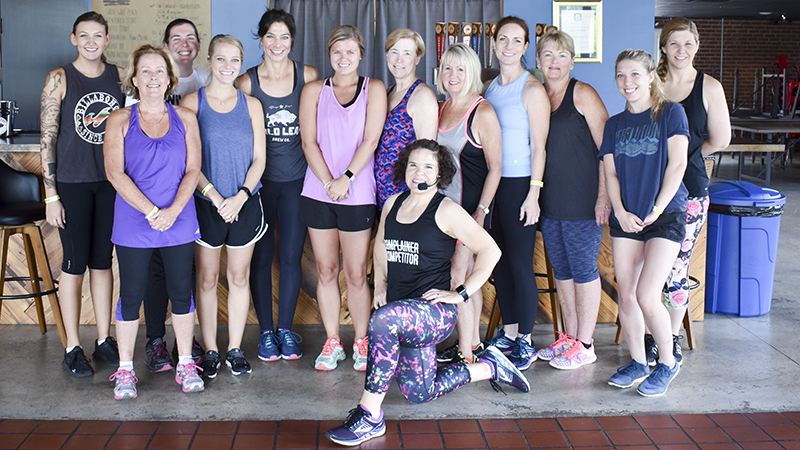 Participants gather for a photo before the Summer Sweat series boot camp session on Saturday. (Alicia B. Hill | Daily News)

Participants ran, lunged and stretched at Wild Leap Brew Co. on Saturday for better health and a glass of beer.

The boot camp workout was part of the Summer Sweat series hosted by Towne Fitness and Wild Leap, which event organizers hope will attract new faces to both locations.

“We know that breweries all over the country do yoga, and we just thought ‘how can we do something a little bit different?’” said Rob Goldstein, the co-owner of Wild Leap Brew Co. “Working with Towne Fitness, which is such a great place here in town, the idea came up to feature a whole array of classes as a way to create a new environment for their existing members and introduce new folks to a spot that they might not have been before.”

According to Goldstein, the classes have attracted anywhere from 15 to 40 people.

“It’s very well-attended,” said Mary Kate Villamor, a Towne Fitness instructor. “I think everyone enjoys getting outside of the gym.”

Villamor led participants in an hour-long workout Saturday, and at the end, everyone was allowed to drink a glass of beer or take home a can. While the free beer was nice, many of the participants said they enjoyed the chance to spend time with people in the community.

“It was excellent,” said participant Donna Turner. “I just moved back to town after having grown up here, and this is a really great fitness opportunity and a great time to try new beer. It is really a great time.”

The event also drew in people who aren’t members of the gym and workout elsewhere.

“It was my first time here [at the Summer Sweat series],” said Rebecca Benefield, another participant. “I didn’t actually plan on coming today. It was a decision I made last night. I saw the tickets, and I bought them.”

Saturday’s event was the first part of an extension on the program due to its success this year.

To learn more or to register, visit Wildleap.com. Classes cost $10.

Re imagining the classics: Retired art teacher uses a…