Art of Storytelling: Davis’ workshop sold out in January 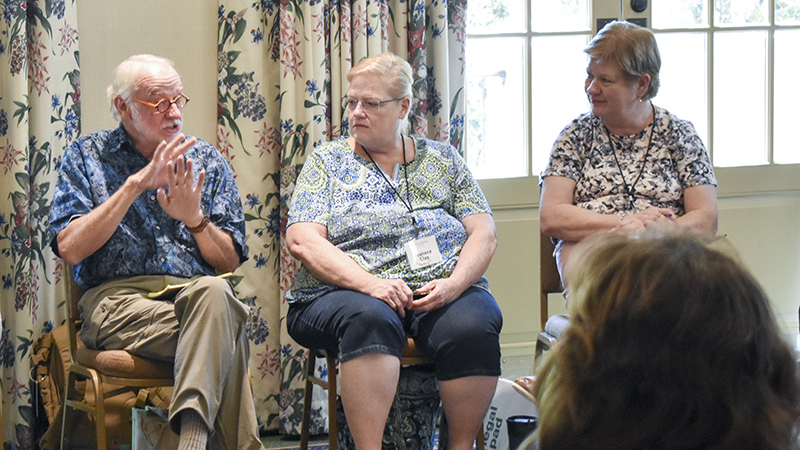 A small crowd of potential storytellers listened closely Monday as internationally renowned storyteller Donald Davis explained the difference between the written word and spoken word at a workshop at Hills & Dales Estate.

The 2018 Summer Storytelling Workshop, which is hosted by the Azalea Storytelling Festival committee, aims to help prospective storytellers take memories and turn them into the stories, like the ones Davis has been entertaining crowds with for decades.

“Everybody has stories in their memory, some that we don’t even know are there, and so we are learning about how to explore memory and find parts and pieces and put them together,” Davis said.

The festival committee was excited to have Davis in town for an Azalea Festival related event.

“He has been coming down since ’95, but he has been doing our festival since ’97,” said Joyce Morgan, one of the co-founders of the Azalea Storytelling Festival. “He helped us organize the festival, and he has always come at least every other year and sometimes more. I think he has now been to 16 of our 22 festivals, but he’ll be back in the spring.”

This year, 20 people from six states participated in the workshop. Some of the participants traveled all the way from Texas for the workshop. According to Morgan, many of those participants are new to either Davis’ workshops, the Azalea Festival or both, so the workshops also serve as an introduction. However, reserving a seat can be a challenge due to its popularity.

“It has been wonderful. This is just our third year, and the workshop was full in January,” Morgan said. “I already have 13 people on the waiting list for next year.”

In addition to the festival, the workshops and other related events also draw attention to LaGrange.

The storytellers participating in the workshop will perform on Wednesday at 11 a.m. at LaGrange College Chapel, Thursday at 1:15 p.m. at Bellevue and Friday at 7:30 p.m. at the LSPA Black Box Theatre. The events will feature three to five storytellers from the workshop and an emcee. They are free to the public.