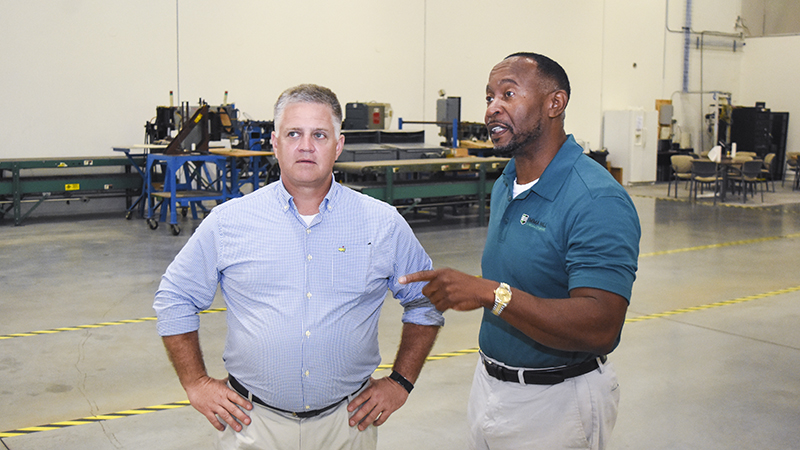 U.S. Congressman Drew Ferguson toured Emma Hill Manufacturing in LaGrange Tuesday morning to get a firsthand look at how changes to the tax code has affected an area business.

Jeffrey Willis, CEO of Emma Hill, said the company is increasing its manufacturing capabilities as it looks to max out its productivity in its current location. Emma Hill is an automobile floor mats manufacturer that can currently produce about 7,000 mats a day.

After the purchase of six more injection, molding machines and two more extrusion lines, Willis said the company can make approximately 17,000 mats each day. The company current employs 27 people, but the increased production would mean another 50 jobs.

“He doesn’t know who we are,” Willis said of President Donald Trump. “But we are a walking example, a textbook [example] of what he expects out of these changes he is trying to make.”

Willis said the machines each take six months to build and they are ordered in phases, so it’ll take Emma Hill a few years to get to full capacity. By 2020, he suspects they’ll be there.

He said that every new machine means 10 new people are hired.

“That’s the piece of this that is so important,” Ferguson said. “It’s not just the capital investment here, it’s the human investment.”

Nissan and Honda are Emma Hill’s two primary customers, Willis said. The company ships its floor mats both domestically and internationally, but he said he has no concerns about tariffs.

“Our products aren’t targeted and as it turns out, it helps us, as strange as that is,” Willis said. “It’s making these manufacturers think twice and consider that maybe their stuff needs to come through Emma Hill.”

Ferguson said it’s always a positive to come back home and hear that the work he’s doing in Washington is making a difference.

“I get to come back here and know we played a very small role in helping push forward something as transformative as tax reform,” Ferguson said. “As excited as I am for Jeff, I am more excited about the men and women out there on that floor who are transforming their lives because of this opportunity.”

LPD has given only warnings to violators of new…